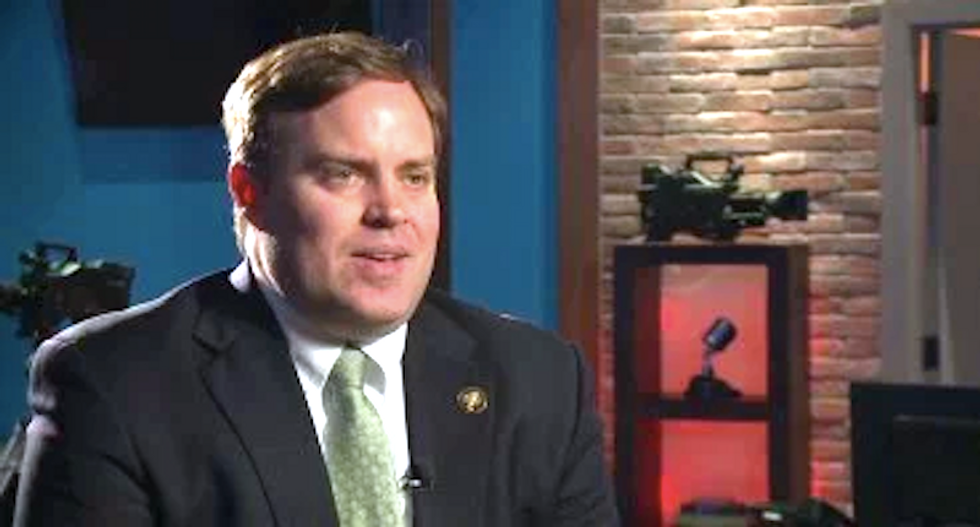 A former Arkansas lawmaker convicted in a kickback scheme has volunteered his services -- along with 80 other federal inmates -- to help build President Donald Trump's promised border wall.

Former state Sen. Jon Woods (R-Springdale) started serving an 18-year prison term in September at a low-security facility in Fort Worth, Texas, after he was found guilty on 15 counts in the fraud scheme involving state grants, reported KFSM-TV.

The 41-year disgraced lawmaker asked the president to consider cutting the inmates' sentences "if called into action."

"These men are volunteering their labor for the betterment of the country," Woods wrote in the Nov. 8 letter.

State Sen. Bart Hester, R-Cave Springs, who served alongside Woods, said the letter appeared to be a shot at getting his sentence reduced.

"Jon made some really bad choices, and he's going to be with the federal government for a very long time down there in Texas, so it's probably something the inmates are talking about," Hester said. "You know, when you're in prison, you're always trying to find a way to get out."

Woods said he was skilled at general labor and logistics, and other inmates who signed the letter claimed to be welders, crane operators or general laborers.

Some of the federal inmates have a history of violent crimes, including former Milwaukee police officer Andrew Spengler, convicted in 2007 of beating up a biracial man with two other off-duty officers, and two convicted murderers.

Several of the inmates claimed to be Mexican-American.

"I certainly wouldn't be supportive of sending them down there to build a wall," Hester said. "I think we've got a lot of very skilled workers who are able to do that."

State Rep. Jana Della Rosa (R-Rogers) said Woods asked her to read the letter before he sent it to the White House and local media outlets, and she said the former lawmaker had backed Trump early in the 2016 campaign even while other state legislators endorsed other candidates.