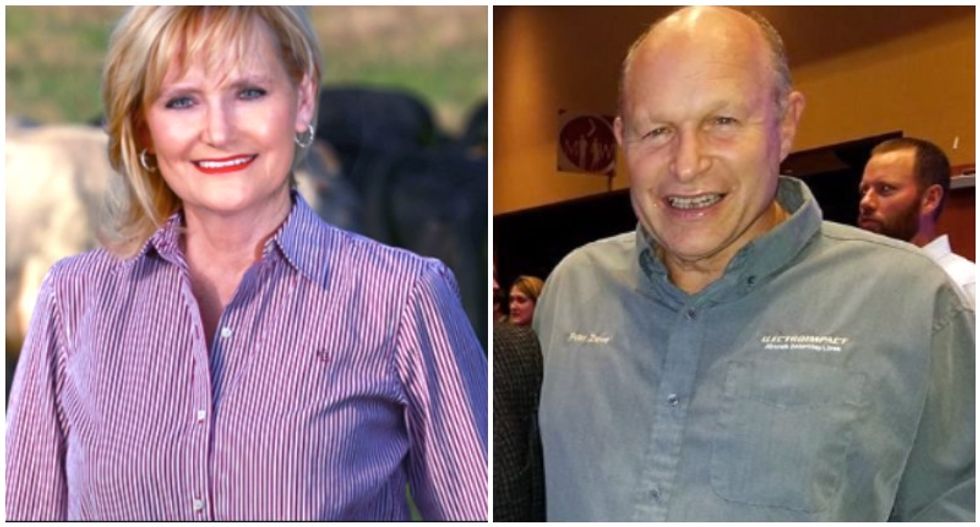 A Republican senator already under fire for apparently racist remarks accepted a donation this week from an out-of-state white supremacist.

Hyde-Smith, who was appointed in March to finish the term for retiring Thad Cochran, faces Democrat Mike Espy, who is black, in a Nov. 27 runoff election.

The GOP senator faced widespread criticism for making a joke about attending a "public hanging," which was seen as a reference to lynching, and then made another crack about making it "more difficult" for "liberal people" to vote.

The Free Press asked Hyde-Smith’s communications director, Melissa Scallan, to comment on Zieve's donation, but she asked to speak with the campaign's finance department and had not responded nearly 18 hours later.

Zieve, who was sued by the state of Washington in 2011 for refusing to hire Muslims at his company, Electroimpact, and made numerous comments against immigrants and non-white people, explained his donation to the newspaper.

The reporter asked whether Hyde-Smith’s racist remarks prompted his donation, and he denied knowledge of the comments and quickly hung up the phone.

Zieve, whose company is a major supplier to Boeing and Airbus and employs about 800 people worldwide, in 2015 offered members of his nearly all-white staff a $1,000 marriage bonus and a $1,000 “procreation bonus.”

“When (our sons and daughters) choose to not repopulate and allow our wonderful country to be backfilled with rubbish from the desperate and criminal populations of the third world, I find that to be disgusting and I find those persons to make these decisions to be repulsive and I don’t like them around me,” Zieve wrote in an email

Zieve has also made references to the "14 words" slogan promoted by white nationalists and regularly makes comments about genocide against Muslims.