Lindsey Graham looking to take over Judiciary Committee so he can investigate Hillary and the FBI: report 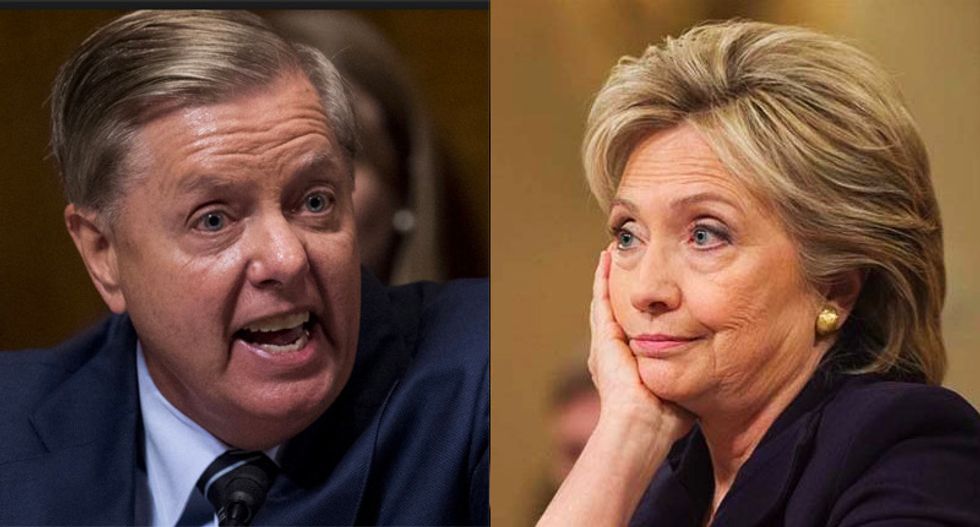 Buried deep in a New York Times profile on the emergence of Sen. Lindsey Graham (R-SC) as a force within his own party comes an admission from the southern senator that he hopes to assume the chairmanship of the powerful Senate Judiciary Committee should the GOP hold onto their majority.

According to the report, Graham has emerged as a "rock star" within the party after stealing the spotlight with his angry diatribes during the Senate's Supreme Court hearings on controversial Associate Justice Brett Kavanaugh.

With that increased influence comes a desire for more, with Graham hoping current Judiciary Chairman Sen. Chuck Grassley (R-IA) will opt to move to head the equally powerful Finance Committee. Graham is next in line to grab the Judiciary gavel.

According to the Times, Graham has expressed an interest in using his potential newfound power to launch yet another investigation into former Secretary of State Hillary Clinton.

The reports states, "[Graham] said as well that he wants to become chairman of the Senate Judiciary Committee after the election, if the current chairman, Senator Charles E. Grassley of Iowa, grabs the gavel of the Finance Committee. Should that happen, he said, he would initiate an oversight investigation into whether the Department of Justice and the F.B.I. were 'in the tank' for Mr. Trump’s 2016 opponent, Hillary Clinton, joining similar efforts in the House."

Should Grassley stay put, there have been rumors that Graham would replace Attorney General Jeff Sessions, who is expected to either step down or be fired by President Donald Trump after the midterms. Graham's Senate seat then could open up for former South Carolina Gov. Nikki Haley, who recently stepped down as the U.S. ambassador to the U.N.

You can read more about Graham's plans here.