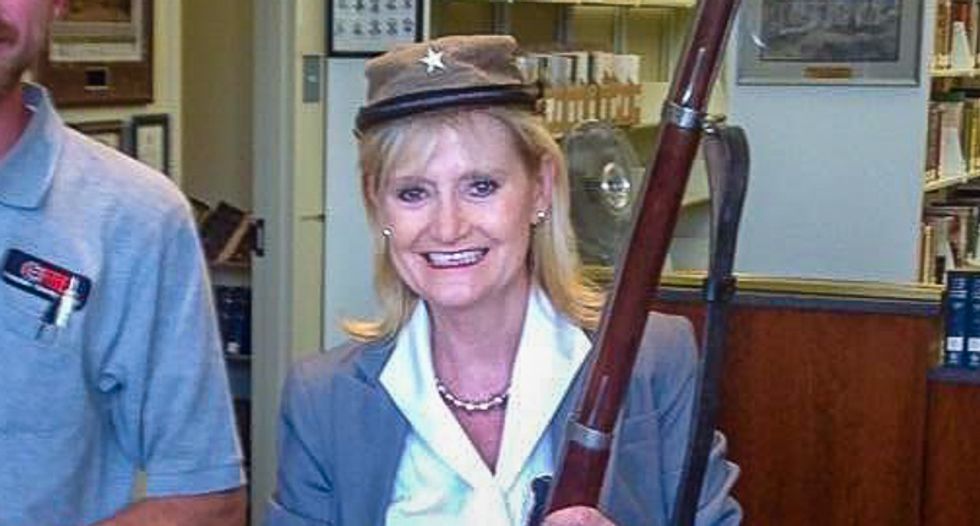 Hyde-Smith is facing former Agricultural Secretary Mike Epsy -- who is black -- in a Tuesday runoff election for U.S. Senate.

"U.S. Sen. Cindy Hyde-Smith attended and graduated from a segregation academy that were (sic) set up so that white parents could avoid having to send their children to schools with black students, a yearbook reveals," the Free Press reports.

In the yearbook, called The Rebel, Hyde-Smith is seen in a cheerleader outfit under a mascot dressed up like a Confederate general and holding a Confederate flag.

"The photo, and the recently appointed Republican senator’s attendance at one of the many private schools that was set up to bypass integration, adds historic context to comments she made in recent weeks about a 'public hanging' that drew condemnations from across the political spectrum," the Free Press explains.

"It is no coincidence that the academy Hyde-Smith attended opened the very year after the highest court’s ultimatum, as did others around the state," the Free Press noted. "The Legislature even approved private-school vouchers for white families to offset the costs of sending their kids to whites-only private schools."

Not only did Hyde-Smith attend the "seg academy," but she also sent her daughter to Brookehaven Academy, another segregation school.

"Even to this day, Brookhaven Academy, from which Hyde-Smith’s daughter graduated in 2017, is almost all-white. In the 2015-2016 school year, Brookhaven Academy enrolled 386 white children, five Asian children, and just one black child, the National Center for Education Statistics shows," the Free Press explained. "That’s despite the fact that Census statistics show Brookhaven is 55 percent black and 43 percent white, per 2016 Census estimates."

Hyde-Smith, who was appointed to the U.S. Senate, is facing a contentious election bid in Mississippi after repeated racial scandals.

In addition to her "public hanging" comments which were widely viewed as referring to lynchings, she was caught wearing a Confederate hat and accepted a $2,700 donation from a notorious white supremacist and lashed out at critics during the final debate.

Epsy has criticized Hyde-Smith for reinforcing stereotypes about Mississippi that he argues would hold back the state economically.