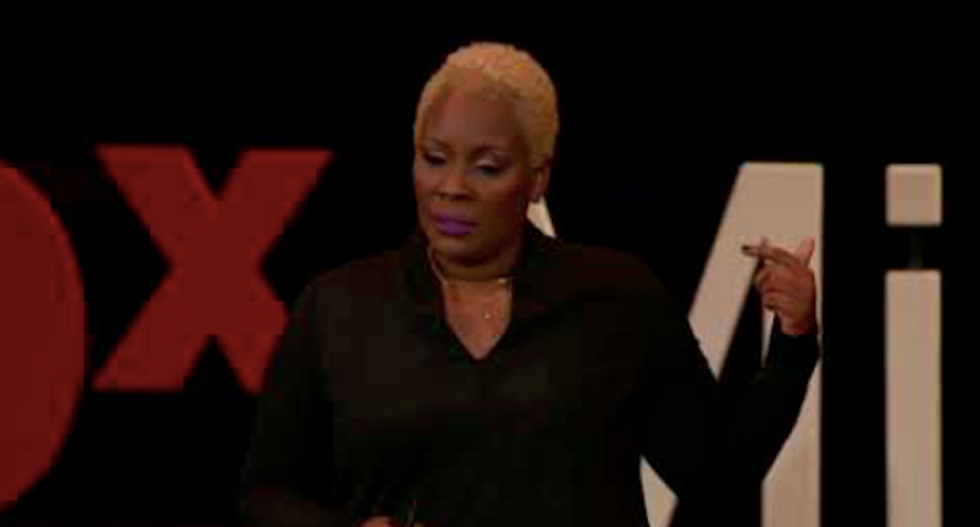 The touching interview with the great-grandmother reportedly caught reality star Kim Kardashian's attention, and she personally lobbied President Donald Trump to grant Johnson clemency. She was out weeks later.

Sam is Director of Dignity for Incarcerated Women for Cut50 and Founder and Executive Director of The Ladies of Hope Ministries, which helps disenfranchised and marginalized women and girls rejoin society.

She's currently developing a project with 44 Blue, the production company behind Lockup, one of the longest running MSNBC series profiling life behind bars. In their new series, they hope to highlight the stories of women prisoners.

Raw Story spoke with Sam about her advocacy, her new project, and why Tuesday's midterms matter to some of the most vulnerable people in America: female prisoners sentenced  to long prison terms for crimes that many would consider nonviolent.

Tana Ganeva: You shot the famous video of Alice Marie Johnson that apparently caught Kim Kardashian's attention. Did you expect that outcome and that Alice would be freed?

Topeka Sam: I would say I can't say I expected for her to be freed then when we shot the video, but all the efforts that led up to that were so that she would be freed. We just didn't know that it would go viral and that it would happen so quick.

For about a year, prior to that one video, we were doing symposiums around the country... I organized Real Women, Real Voices symposiums with the National Council and we brought in women from all over the country who'd been impacted by incarceration and we Skyped in with Alice ... so she had spoken with us on a panel at University of Washington, Seattle, and NYU. And so we also connected her with Google which ... they actually did two with her at Google ... and then I was asked to do the video with Mic, which I did, and that's when everything kind of spiraled.

Tana Ganeva: Why do you think Alice Johnson's story resonated with people this much. She's not the only person facing a similar experience?

Topeka Sam: It was the fact that she was a grandmother and a great-grandmother, the fact that it was her first time ever being arrested for a very minor role in this conspiracy. So I think that people didn't even really understand what the conspiracy law was ... that you can just make a phone call, pass a message, that sometimes you don't have to do anything, you can just be assumed that you did something or someone can say that you did and it can land you with a life sentence. That's what happened to Ms. Alice and is happening to women who are in prison right now—for that, or less.

So I think hearing her voice, seeing her in her uniform from inside of a prison really hit the public in a way that you know moved Kim Kardashian to act. We're just incredibly grateful that she did move and that she used her influence in order to bring it home. To bring Alice home.

Topeka Sam: When we look at people who are innocent ... it could be someone who was lied about, or sometimes there's not even any evidence ... and just the testimony of someone trying to make a deal so that they won't get in trouble themselves. But then you also have to look at, specifically women. How women are uniquely impacted by conspiracy law because women are usually the marginalized girlfriends of someone who may be engaged in specific activity.

It's also about how we criminalize poverty ... if you take all these factors, the conspiracy law will just engulf people into this criminal legal system in a way that then has them in prison for life. What they usually want is for you to cooperate in exchange for a deal. And what happens is, if you want to believe in the criminal justice system and you think that you can have a fair trial, that when you go to trial you end up getting penalized and people end up getting life sentences, like Ms. Alice, who was originally offered a 5-year plea.

And she would have served 5 years instead of 20.

So, from making a phone call, to people who have never even been in specific locations but someone said they were there. There's a woman who was incarcerated who also received clemency, Michelle Miles, after serving 19 years because a gentleman who was her boyfriend ... everyone thought she was the person who was in charge of this criminal enterprise ... but usually the first person who makes a deal will be the more involved person. Conspiracy law is very, very loose. As long as someone says that you did it, you have to prove that you're innocent.

Tana Ganeva: Will you tell me about your new project?

Topeka Sam: The project for 44 Blue ... I was a fan of Lockup before. They told me, I think what you do is important, I think that the work that you do is amazing and I want to help and lift your platform on.

Tana Ganeva: Do you think it's problematic to focus on people that you'd consider a "perfect prisoners"? Like someone who's a grandma and who committed their first offense ever ... because that's not that representative.

Topeka Sam: I would agree. I think that what will be amazing about this series is that we're not just focused on those particular cases or those women that seem like for lack of a better phrase, the "perfect prisoner."

More so we look at situations that are systemic. For example, there's a woman who's in Florida ... she was homeless in Florida. Gloria Taylor. And she has served 29 years for 28 grams of cocaine. She has a life sentence. She was arrested multiple times, and she even was pregnant and had a child in prison.

What I think the problem is, she was given a life sentence due to habitual offender laws. It's basically the three strikes and you're out law. When a woman has to continue a particular lifestyle, which is deemed to be illegal, but has no help or resources. Clearly probation or parole had failed her each time she was released from prison ... and 28 grams. That's clearly personal use for someone... to incarcerate someone for a lifetime for that?

We're criminalizing someone based on their need to survive. She had four children I think? It's those cases. You still have to humanize people. And so when you look at these cases we look at unique situations. I mean, when I look at these women, they're all unique and they all deserve to have freedom.

There are ways that we can heal communities and keep the public safe. That's when we reinvest in communities and in people, instead of in prisons. And she's at the state level, and we're really excited because it's looking like Andrew Gillum might be elected there and if he is, he's already committed to one of our organizers down there that Ms. Gloria Taylor will be one of the first cases he will be looking at to provide clemency for. Governors can do greater things than even the president can do at the level of clemency and pardons at the state level.