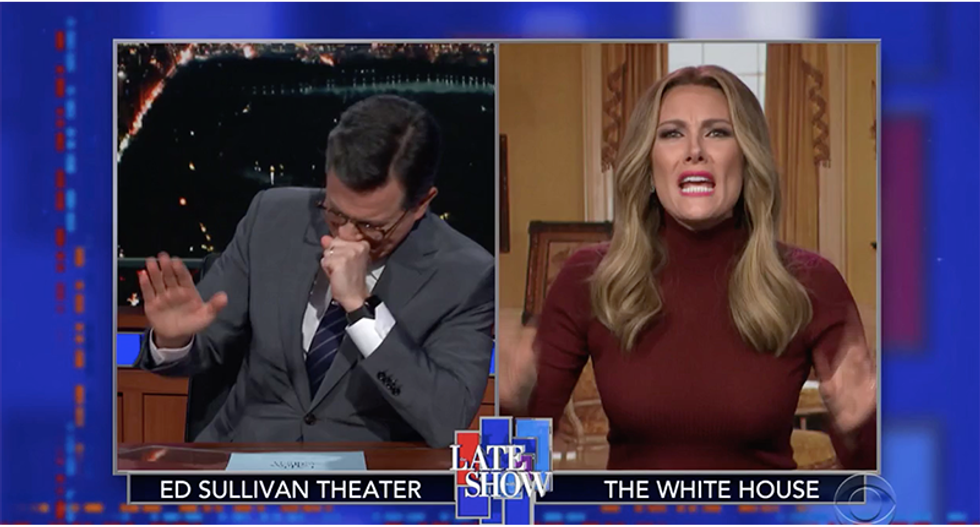 "Late Show" host Stephen Colbert tried to remain serious while he was speaking with fake first lady Melania Trump, who was gearing up for the White House Thanksgiving. But when the first lady took a serious turn, Colbert broke into hysterics.

Mrs. Trump noted that the reason she wanted deputy national security advisor Mira Ricardel fired was that she was "she was lying, she was petty, she was vindictive... and we've already got all of that covered."

Colbert noted that some people are saying that asking for Ricardel to be fired in a press release was "a tad insensitive."

"Aaaaaaa, no," Mrs. Trump said with sadness. "Stephen, you know me. You know me. All I want is to end bullying and if you disagree with that I will crush you like a tiny bug underneath my stilettos. Crunch. Crunch."

"But isn't this something you should have handled with your husband in private?" Colbert asked.

"Oh, Stephen, I haven't touched my husband's privates in years," she confessed.

"This is the side of the public -- er -- the public hasn't seen this side of you before, f*ck," Colbert said, discombobulated. He then simply burst out laughing.

"No! I'm not OK! This entire thing is very upsetting," Colbert said.