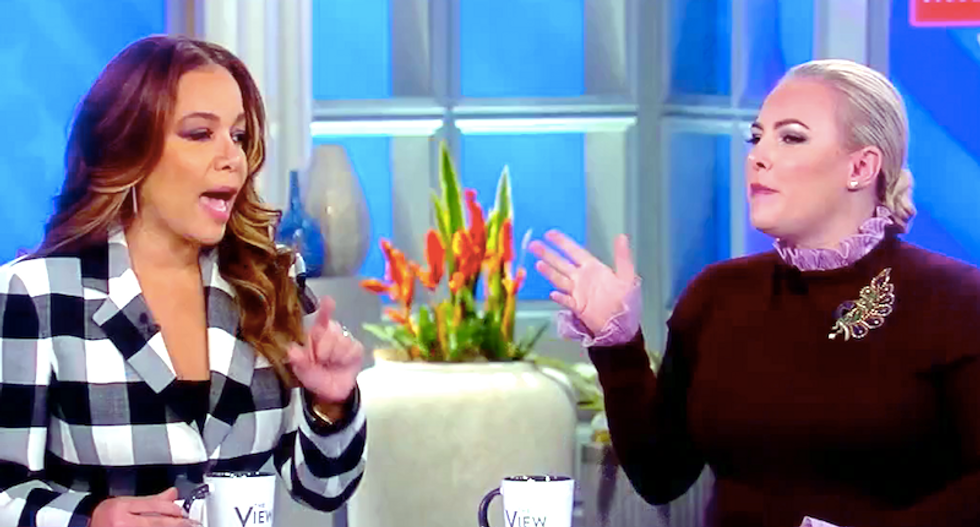 "The View" co-host Meghan McCain and Sunny Hostin clashed over election results that saw Democrats take a House majority while losing ground in the Senate.

The conservative McCain argued some high-profile Democrats lost because they had drawn national attention, and she rejected the idea that Republican voters should have sent a message to President Donald Trump by voting against candidates he backed.

"The serious lesson for Democrats, also, is that Republicans are not going to vote against their own agenda and against their own interests," McCain said, "meaning I think there's an impression sometimes if you don't watch Fox News that all Republicans, if you're against Trump or you have issues with his rhetoric that automatically I have somehow morphed into a liberal, that every ideology and principle I have ever agreed on, the principles that make me who I am, the conservative that I am, have flown out the window -- all of a sudden I'm a Democrat."

"That is not the case," she added. "Republicans are going to vote for their own agenda, and they did a lot last night, especially in Senate and governor races. The Democrats that were competitive were the ones that were more moderate. That's a lesson I would take away."

Hostin began her contribution to the panel discussion by trying to express what had been her biggest disappointment with the election, but McCain cut in.

"Of course it's disappointing," she said. "You're a Democrat. It's not disappointing for me. I'm a Republican. I'm going to end up voting for the Republicans."

Hostin tried again, but McCain interrupted to thank a man in the audience for nodding his head in agreement with her.

"Thank you, sir, for nodding your head," she said.

Hostin gave it another shot, saying the election was unusual because it was a referendum on Trump's character.

"I understand that people want to vote with their party," Hostin said, "but I think at some point you have to put country before party, and there's been so much divisiveness in this country."

McCain erupted, saying Republicans shouldn't have to break from their own party to send a message to Trump about his behavior.

Hostin said she was missing the point.

"Can I just say one more thing?" she said. "I'm not going to vote for (Andrew) Gillum, like, the idea that I'm somehow going to transform into a Democrat. Sunny just said, if I put country over party."

Goldberg assured her Hostin wasn't asking her to vote for Gillum, but she said some of Trump's behavior was plainly unacceptable.