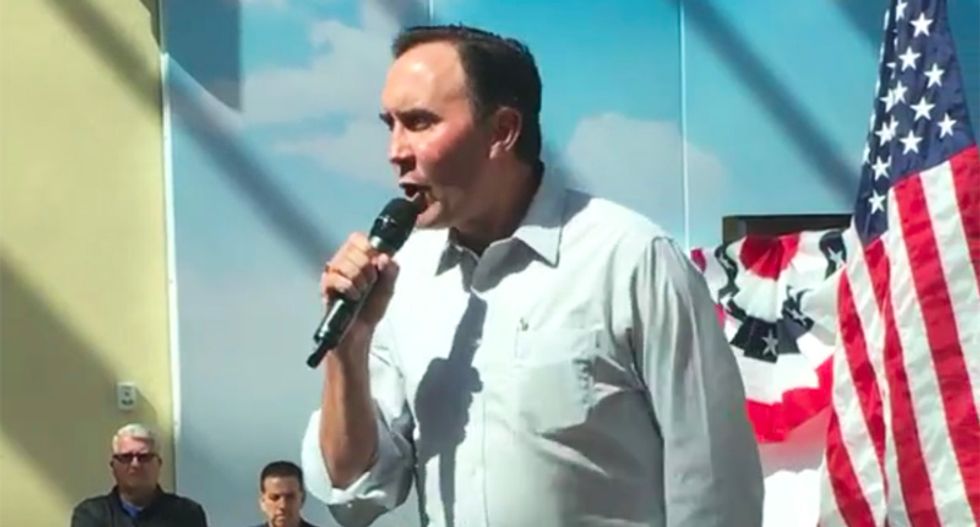 On the same morning that Robert Bowers allegedly slaughtered 11 people in a Pittsburgh synagogue because he believed there is a Jewish conspiracy to bring immigrants into the country, a Texas lawmaker in a tight race accused his opponent of being in the pocket of Jewish philanthropist George Soros.

According to a report at The Intercept, Rep. Pete Olson (R-TX) was filmed ranting about the campaign finances of his opponent, Sri Preston Kulkarni, saying he has the backing of outsiders.

Soros has long been a bogeyman of conservatives who invoke his name in what critics call a dog whistle used to rally anti-Semites. Just two days before Olson gave his barnburner speech, Cesar Sayoc -- a fanatic Trump booster -- was arrested and accused of sending mail bombs to Soros as well former Presidents Bill Clinton and Barack Obama, CNN and various opponents of the president.

During his speech, Olson attempted a call-and-response with supporters by shouting into the microphone.

As the crowd shouted back, "No," Olson supplied his own answer.

"George Soros! California! Massachusetts! Chicago! They think they can buy Texas and make us blue," he exhorted the crowd.

As the Intercepts' David Dayen notes, FEC records show that Kulkarni has not taken any money from Soros, instead relying heavily on the Asian-American community for a large portion of the $1.2 million he has raised to take on the Republican incumbent.

Olsen has previously come under fire for calling Kulkarni a “Indo-American carpetbagger” and then denying his words has any racial overtones.

You can watch him attacking Soros below via YouTube: