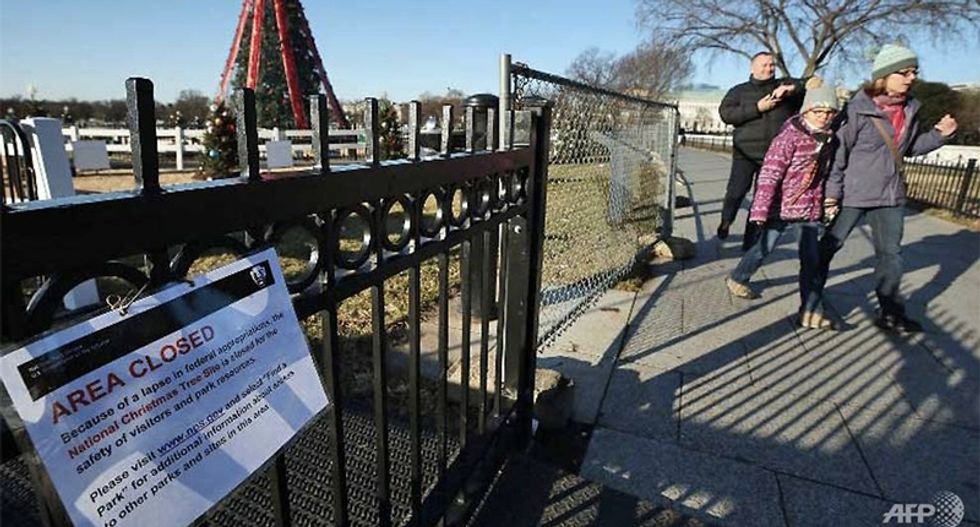 The area around the National Christmas Tree near the White House has been closed by the partial government shutdown, which US Budget Director Mick Mulvaney said could last into 2019 (Photo courtesy of AFP)

The partial US government shutdown gridlocked Washington for a second day on Sunday, with the White House budget director saying it could persist into the new year and the next Congress.

A budget deal to end the partial shutdown -- which forced several key US agencies to cease operations starting on Saturday -- appears a distant prospect as Congress adjourned for the weekend ahead of Christmas.

"It's very possible that this shutdown will go beyond the 28th and into the new Congress," White House budget director Mick Mulvaney said of the impasse over funding for the wall that President Donald Trump wants to build on the US-Mexico border.

But while trying to pin the blame on Democrats, Mulvaney, speaking on "Fox News Sunday," acknowledged that Trump's adamance on the wall played a role.

"This is what Washington looks like when you have a president who refuses to sort of go along to get along," Mulvaney said.

It is the third partial government shutdown of the year, even though Trump's Republican Party still controls both the House of Representatives and the Senate.

Democrats will take control of the House on January 3, giving them greater leverage in the shutdown talks.

Trump canceled his holiday vacation to Florida due to the budget wrangling.

The president has dug in on his demand for $5 billion for the border wall, a signature campaign promise that he repeatedly said Mexico would fund.

"The only way to stop drugs, gangs, human trafficking, criminal elements and much else from coming into our Country is with a Wall or Barrier," he said Sunday on Twitter. "Drones and all of the rest are wonderful and lots of fun, but it is only a good old fashioned Wall that works!"

But Democrats believe they have a stronger hand in the faceoff against a president who said he would be "proud" to force a shutdown -- rarely popular among the broader public -- in the name of tighter border security.

In the absence of a deal, federal funds for dozens of agencies lapsed on Saturday, leaving some 400,000 federal workers on furlough. A similar number were deemed essential -- including Border Patrol officers, health inspectors and airport security workers -- and are remaining on the job without pay.

With most lawmakers home for the holidays, and few evident signs of flexibility on either side, it was hard to discern the outlines of any resolution.

"The Democrats offered us $1.6 billion a couple weeks ago, then they offered the president $1.3 billion this week," said Mulvaney, who is set to become Trump's acting chief of staff in January. "That's a negotiation that seems like it's going in the wrong direction."

He was speaking on ABC's "This Week."

Senator Chuck Schumer, the minority leader, blamed the shutdown on a "remarkable two-week temper tantrum" by the president, who he said could reopen the government if he would "abandon the wall."

Another Democrat, Senator Chris Coons, said on CBS that now "there is, frankly, no path towards his getting $5 billion in American taxpayer money to meet his campaign promise of a 'big, beautiful wall' with Mexico."

Even some Republicans expressed consternation over what they dubbed an avoidable crisis.

"This is something that is unnecessary. It's a spectacle and, candidly, it's juvenile," said Corker, speaking in his final days before stepping down from Congress.

"This is a made-up fight so that the president can look like he's fighting."

Corker suggested that a deal could be reached if Trump were prepared to give ground on Democrats' demand to protect the status of the "Dreamers" -- Latinos who, as children, arrived illegally in the United States with their parents.

Mulvaney said Trump was "willing to discuss a larger immigration solution," but that citizenship for the "Dreamers" was not a popular idea among many Republicans.

The year-end holidays have masked many of the shutdown's visible effects, but they will gradually spread.

Visitors to the capital's park-like National Mall, home to attractions including war memorials and the towering Washington Monument, were among the first to feel it.

Several criticized the shutdown, which added to an air of chaos in a capital still reeling from Defense Secretary Jim Mattis's resignation last week over Trump policies.

But another visitor, Howard Vander Griend of Tennessee, predicted Trump will come out a winner: "I think he will get what he wants, and I think that's a good thing."

About three-quarters of the government, including the military, is fully funded through September 2019.

India’s prolific movie industry enjoyed pride of place at the Cannes Film Festival, starring as the film market’s first-ever guest of honour. FRANCE 24 spoke to director Shaunak Sen about his stunning New Delhi-set documentary “All That Breathes”, which screened at the festival this week.

The festival’s 75th anniversary has been celebrated as a homecoming, a much-needed reunion after two years of lockdowns and virtual events. It’s also been a time of farewells, with at least two Cannes stalwarts bowing out this year.