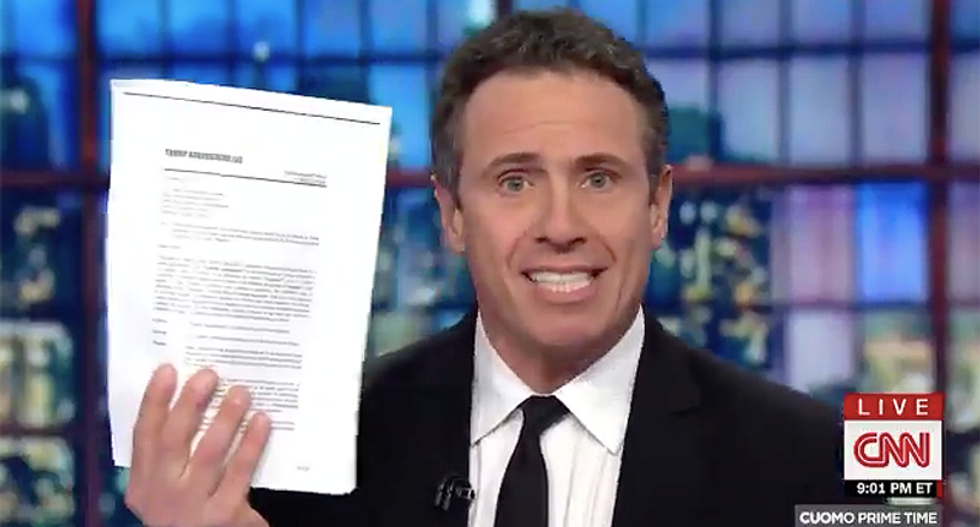 CNN's Chris Cuomo obtained a copy of the letter of intent rumored to exist about the Trump Tower Moscow project.

During a Sunday interview, the president's lawyer Rudy Giuliani claimed there could have been conversations about the project up until Nov. 2016, but that nobody ever signed any letters of intent.

“Tonight, the facts fly in the face of the story, or at least the story the president would have you believe,” Cuomo said. “This is the letter of intent for the proposed Trump Tower Moscow, all right. It is signed by Donald J. Trump. How do I know? Well because we have been told it was by his lawyer and it is, and I’ll show it to you.”

“Here’s the letter," Cuomo went on. "Cohen didn’t sign it, the president did. Then this weekend the president’s esteemed lawyer said, quote, ‘It was a real estate project. There was a letter of intent to go forward, but no one signed it.’ Why are they doing this? This is Donald Trump’s signature. It’s here. We know this. Now, here’s what itself going on, this doesn’t matter legally. That’s the point. They’re not preparing for trial. Don’t examine it that way. They’re preparing for a PR campaign to convince you of what they want you to believe. Our job is to help you keep the facts front and center, and we’ll do that.”