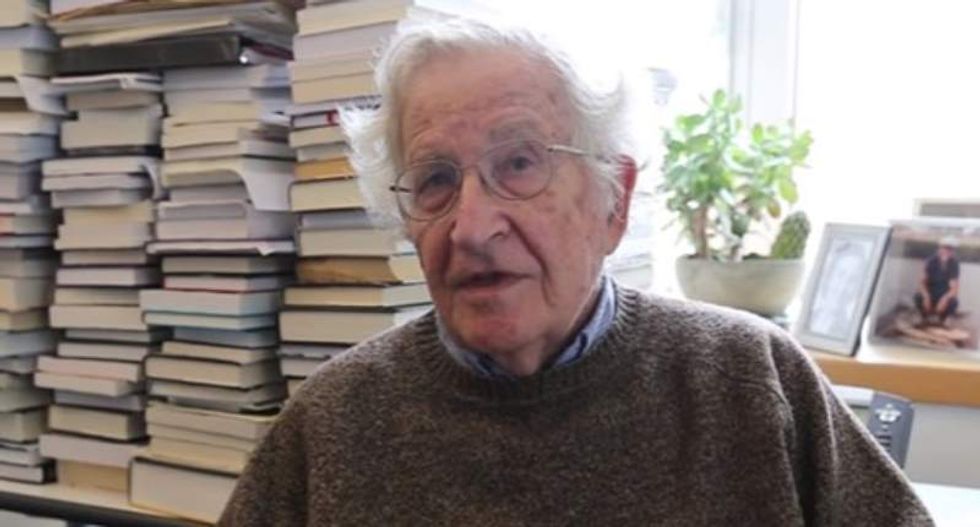 The famed political scientist and linguist has described the Republican Party as the "most dangerous organization in human history," due to its policies on climate change and nuclear weapons, and he said Trump was single-handedly making the world more dangerous for the human species, reported Democracy Now.

"There have been plenty of monsters in the past, plenty of them," Chomsky said. "But you can’t find one who was dedicated, with passion, to destroying the prospects for organized human life. Hitler was horrible enough, but not that."

Trump himself evidently believes in climate change, Chomsky said, because his golf course applied for permission from Ireland to build a wall to protect against rising seawaters, and his administration has issued reports acknowledging rising global temperatures.

"They said if we extrapolate current trends by the end of the century, the climate will have warmed several degrees centigrade, meaning a huge rise in sea level, which they underestimate," Chomsky said. "So, basically, we’re going over the cliff anyway, and automotive emissions really don’t add much to this, so there’s no point cutting them back."

The Trump administration was pursuing policies that would make climate change more severe, Chomsky said, despite an apparent recognition of the risks for global calamity.

"The assumption of the department is that everyone in the world is as criminally insane as we are, and isn’t going to do anything about it," Chomsky said. "And since — on that assumption, yeah, let’s just rob while the planet burns, putting Nero into the shade — he only fiddled while Rome burned."

"I can’t think of anything like this in human history," he added. "You just can’t find words to describe it. And at the peak of the monstrosity is, in fact, the Trump administration."