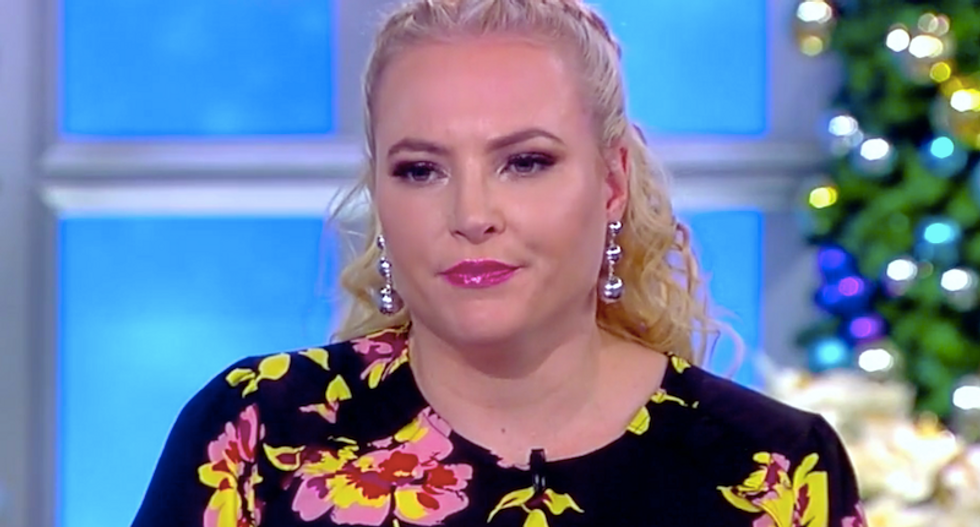 Behar reportedly threatened to quit over McCain, who she called an "entitled b*tch," and host Whoopi Goldberg opened the episode by warmly greeting Behar -- who was wearing a Goldberg-designed Christmas sweater.

"Say, Joy, that's a very nice sweater you're wearing," Goldberg said, and then Behar -- who recently celebrated her 20th anniversary on the show -- took a friendly jab at "The View's" creator.

"Barbara Walters had the ugliest Christmas sweater," Behar said, and co-host Abby Huntsman asked if the veteran journalist would have agreed. "No, that's the tragedy of it -- she thought it was attractive."

McCain remained silent throughout the exchange, and offered only one contribution -- a mild defense of some Fox News anchors she considered to be quality journalists -- until pushing back on a discussion of alleged wrongdoing by President Donald Trump.

"I don't likely living in hypotheticals in life in general," McCain said during a discussion on the special counsel investigation. "We know Michael Flynn has cooperated more than we thought -- we know that today. Each day there's a little bit more. We shouldn't get out ahead of our skis over what's impeachable when we don't know what we don't know."

Then she complained that Goldberg seemed to be afraid to utter the word gun on air.

"I've been promised before, including on this show, that we had it, that we had the smoking gun -- I will still say 'gun' on national television," McCain said, thanking an audience member who whooped his approval.

"I'm sorry, the reason I didn't say gun is because (Rep.) Steve Scalise was coming on, and I didn't want anybody to misunderstand the joke," Goldberg said. "That's why I didn't do it, just so we're all clear -- sorry."

McCain was not satisfied with her explanation.

Goldberg insisted there was no ban on saying gun, and again explained she was being overly sensitive to their Republican guest, who was wounded last year by a gunman during practice for a congressional baseball game.

"Two days ago there was something brought up about guns, where we said, 'guns again,'" McCain said. "I don't know what it is today."

"This was just me trying to be thoughtful," Goldberg assured her.