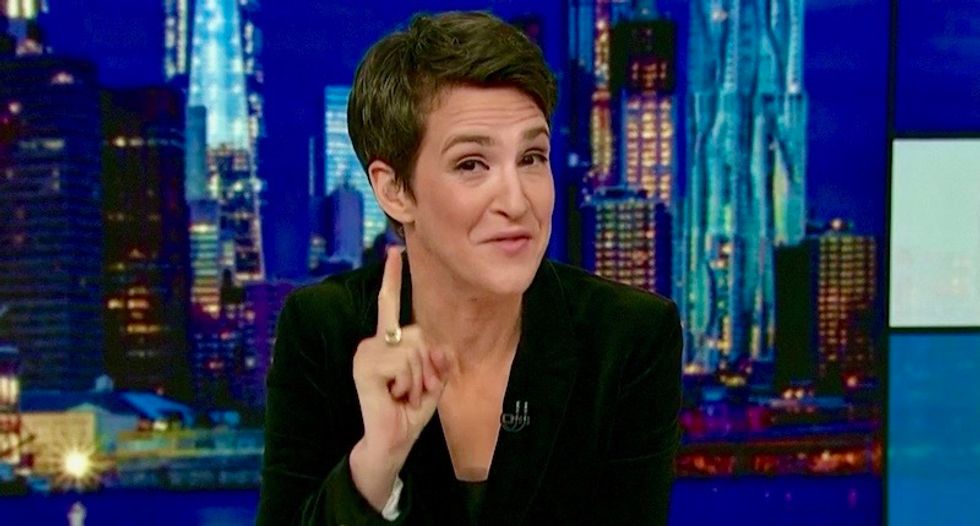 MSNBC's Rachel Maddow on Friday revealed that there may be more than meets the eye on President Donald Trump's extensive government shutdown battle.

Though the fight with Congressional Democrats is ostensibly about funding for his border wall with Mexico, Maddow noted that a US federal court spokesperson "gave word today that the American federal judiciary is about to run out of money to keep operating as of one week from today."

With the shutdown in its 14th day, the host said, it's closing in on the longest shutdown on record that lasted 21 days.

"The court system says they can piece together enough money from here and there to keep things running for about 21 days, for about the length of the longest shutdown on record," the host said. "That means they've got enough money to piece things together in the court system until next Friday, until January 11th."

"After that," Maddow added, "individual courts and individual judges will have to figure out what they're going to do without money to try to keep the U.S. federal judicial system running."

News that the federal judiciary may run out of money in a week came on the heels of reports that special counsel Robert Mueller's grand jury term was extended by six months into the summer of 2019.

Maddow noted that during his press conference in which Trump threatened to shut down the government for years if he didn't get funding for the wall sounded a lot like "fantasizing."

"At this point, I think everybody in the country is having sort of the same feeling," the host said, "that the president fantasizing out loud today about a federal government shutdown that goes on for years, maybe that had a little something to do with his personal fantasy that that would end the federal law enforcement and counterintelligence investigations into him and his business and his campaign."

Nevertheless, Maddow added, "law enforcement does not work that way."

"That's no way to end this thing," she concluded. "Even if the courts have to triage, you cannot just dissolve law enforcement this way."