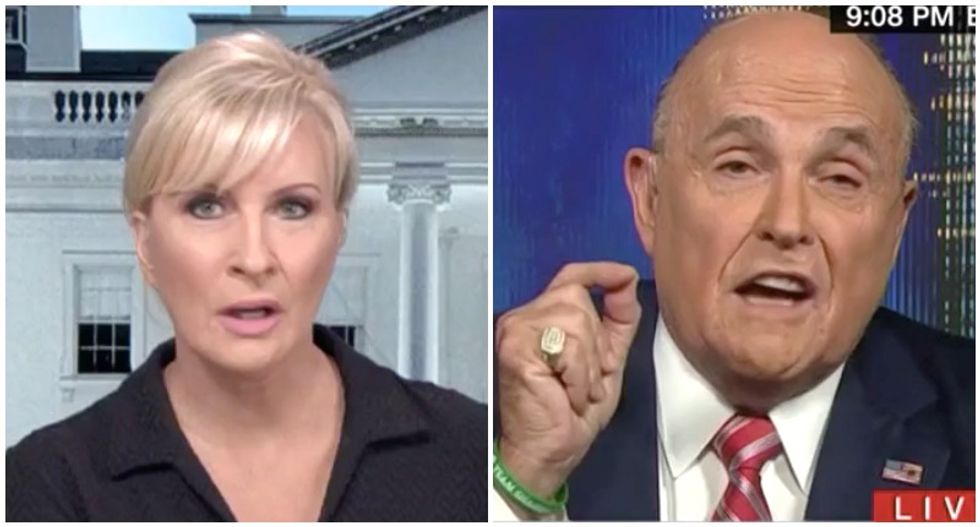 MSNBC's Mika Brzezinski agreed Rudy Giuliani appeared to be "intoxicated" when he admitted the Trump campaign engaged in collusion with Russia -- but she cautioned against getting distracted by that spectacle.

She and "Morning Joe" host Joe Scarborough remarked several times that Giuliani seemed incoherent and slurred during an appearance Wednesday night on CNN, when he changed his story on collusion.

"It was late at night, it was like 9 o'clock, so maybe had you a big dinner sitting in the stomach, maybe a little woozy," Scarborough said.

Brzezinski said Giuliani's behavior had fueled rumors of drinking, but she said that explanation was unacceptable.

"No, you know what we're talking about, but a lot of people are worried about that, but this is the president's attorney," she said. "This is someone speaking for the president of the United States."

Scarborough joked again that maybe Giuliani had eaten too much, but he said his admission was stunning.

"This huge ball of yarn continues to unwind," he said. "We all think we know where it's going to end up. A big step forward, Rudy Giuliani, the president's lawyer, admitting last night on CNN that, yes, members of the Trump campaign committed collusion."

Brzezinski warned that Giuliani's personal behavior was obscuring the larger truth he had revealed about the president and his relationship with Russia.

"I think that there are a lot veiled little jokes here about the possibility of Rudy Giuliani often being intoxicated when he's talking," she said. "I think the bigger concern, this is just analysis, is that he's trying to normalize something that they can't actually pull away from far enough, so they go from 'no collusion' to 'collusion, what's wrong with collusion.'"