Why women still earn a lot less than men 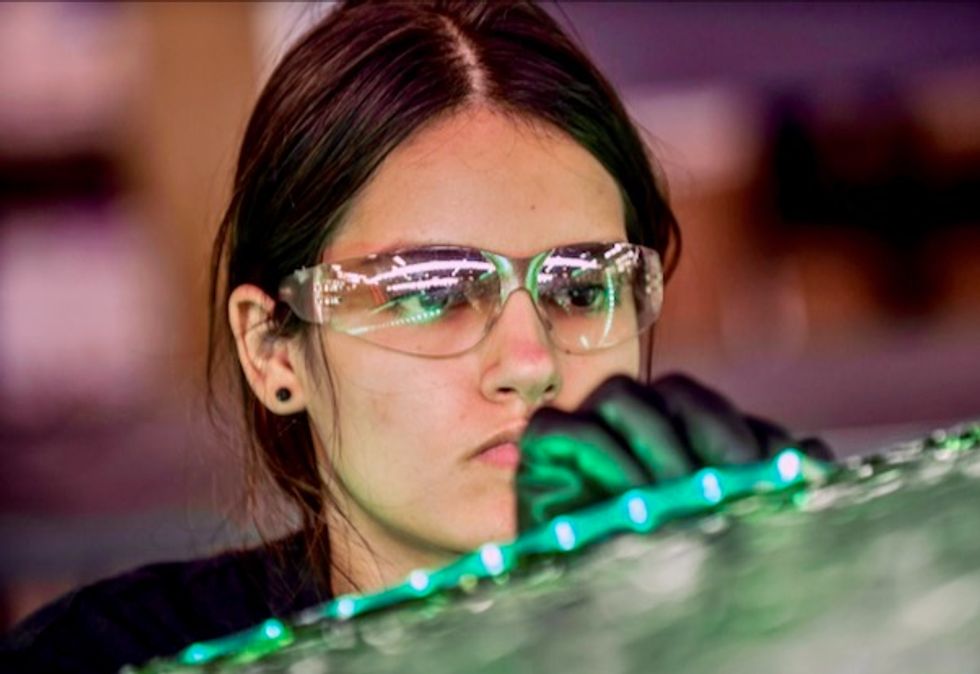 A decade ago, on Jan. 29, 2009, newly inaugurated President Barack Obama signed his first bill into law: the Lilly Ledbetter Fair Pay Act of 2009.

It was the latest legislative effort to close the persistently stubborn gap between how much women and men earn. At the time, women made just 77 cents of every dollar men earned – a level that hadn’t improved all that much since the 1990s, according to Census data.

While existing laws already prohibited gender-based wage discrimination, the Ledbetter Act gave workers more time to sue employers over the issue. And the hope was that it would make a big difference.

My research explores the legal hurdles that have prevented women from achieving pay equity with men. Now, 10 years after the act was passed, more work still needs to be done. 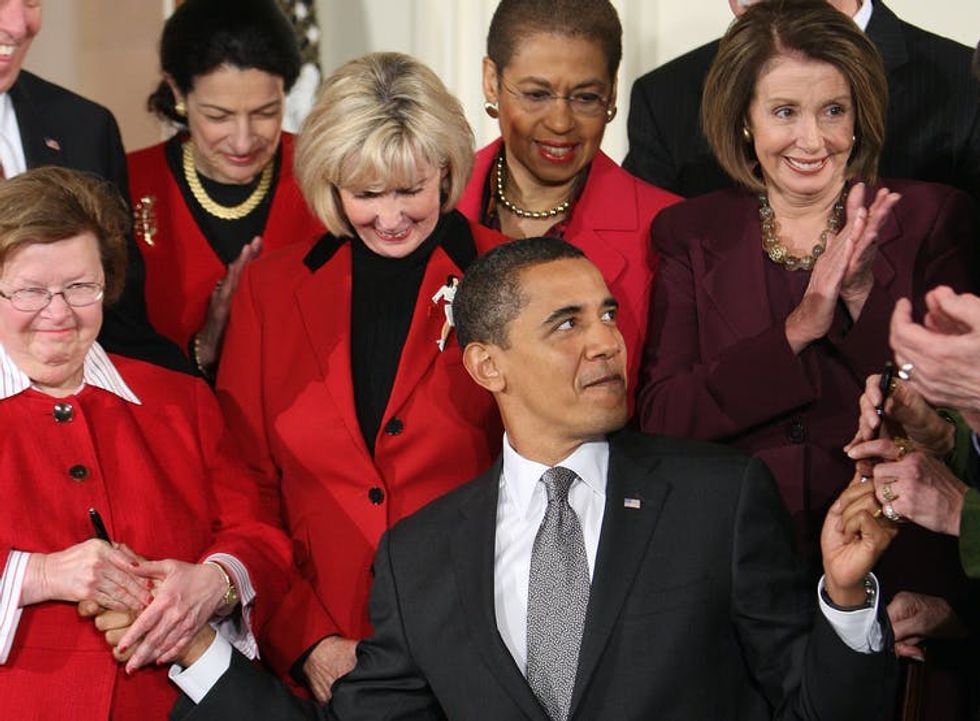 The Ledbetter Act overturned a Supreme Court case that ruled against Lilly Ledbetter, who worked as an area manager at Goodyear Tire and Rubber for more than 19 years. Over time, her pay slipped until she was earning 15 percent to 40 percent less than her male counterparts.

When an anonymous note tipped her off about the extent of the disparity, Ledbetter filed a pay discrimination complaint under Title VII of the Civil Rights Act of 1964, a statute prohibiting employment discrimination on the basis of sex, race, color, national origin and religion. A jury found in her favor and awarded more than US$3.5 million in damages.

The case was appealed all the way to the Supreme Court, which in 2007 ruled 5-4 that employees must file a complaint within 180 days after their employer makes a pay decision. The fact that the discrimination was embedded in each paycheck and that Ledbetter didn’t know of the disparity for many years did not matter. Time had run out on her claim.

In a vehement dissent read from the bench, Justice Ruth Bader Ginsburg noted that the ruling denied workplace realities. She pointed out that since employees often lack information about pay disparities, which can accumulate slowly over time, they shouldn’t be given such a narrow window in which to file a complaint.

Ultimately, the 111th Congress and President Obama agreed with Justice Ginsburg and nullified the decision. The Ledbetter Act makes clear that the statute of limitations for filing a wage discrimination claim resets with each discriminatory paycheck.

The law’s impact, however, has been disappointing.

The rate of new wage discrimination cases hasn’t budged, primarily because employees still lack information about their co-workers’ pay. Salary discussions are taboo in most workplaces, and some employers, like Ledbetter’s, forbid it.

Put simply, a woman can’t file a complaint if she doesn’t know she’s being shortchanged.

Title VII wage claims are hard to prove for other reasons too. Title VII generally requires proof that employers acted with discriminatory intent. However, much discrimination in today’s workplace is not intentional but fueled by unconscious gender stereotypes.

For instance, studies show that workers receive better performance evaluations when they conform to gender stereotypes, such as dominance for men and passivity for women. In one study, participants were asked to award merit-based bonuses to fictional employees with identical personnel files. Men got higher bonuses than women.

The bottom line: Women today earn about 80 cents for every dollar men make earn, up just a few cents since 2009.

And for women of color, the gap is even starker. Latinas earn 52 cents to the dollar of white men, while African-American women earn just 61 cents. Within racial groups, a pay gap between men and women persists, although it is narrower.

Of course, employees who believe they are being discriminated against based on gender can also turn to the Equal Pay Act. This act, signed into law in 1963 when women earned only 60 cents for every dollar men earned, does not require a showing of employer intent to discriminate.

The act was the first to prohibit employers from paying men more than women who perform equal work.

The pay gap has since narrowed by about 20 cents, but not because of anti-discrimination laws. The main drivers have been women’s increased educational attainment and entry into the workforce.

The Equal Pay Act hasn’t been effective because courts read the law narrowly. They generally require that women plaintiffs identify a man with an identical job and resume for comparison. Given that men and women are tracked into different occupations, this can often be impossible.

Moreover, both Title VII and the Equal Pay Act allow employers to defend pay differentials on the basis of “any factor other than sex.” For example, courts have permitted a limitless array of employer excuses for paying women less that are themselves rooted in gender bias, such as women’s weaker salary bargaining skill, lesser management potential or lower prior salary history.

These statutory interpretations may sound technical, but they matter. They help explain why the gap appears stuck at 80 cents and why some estimate it’ll be at least until 2059 until pay equity in the United States is reached.

Another reason the gap is so stubborn is that men and women are steered into different occupations, and male-dominated occupations pay more for comparable work.

Even within a traditionally male field such as computer programming, women are paid less. And, as women move into a field, the entire occupation’s wages sink.

Importantly, economists have found that discrimination feeds as much as 38 percent of the gender gap.

Skeptics of the gender gap argue that it results from women’s choices to work fewer hours and stay home to raise children.

It’s true, women bear a larger responsibility for child rearing and thus may cut back their hours or take time off from the workplace – especially because the United States is the only developed country without paid maternity leave and child care is expensive.

But while mothers face a “motherhood penalty” in opportunities and pay, fathers reap a “fatherhood bonus.”

And so-called “choices” cannot explain why female recent college graduates are paid 82 percent of their male counterparts or why the gap widens at the top. Professional women with advanced degrees who work full-time face a gender gap of 74 percent. 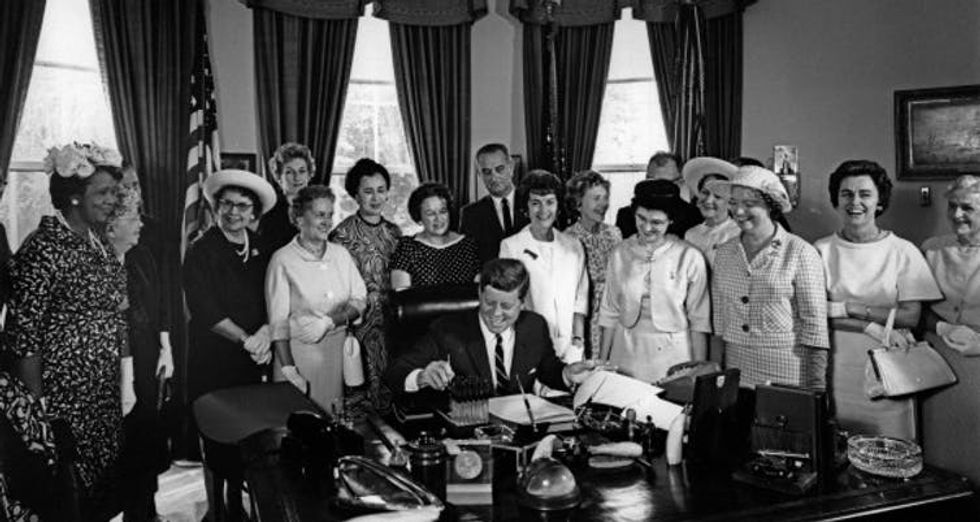 The American Association of University Women meets with John F. Kennedy as he signs the Equal Pay Act into law.

Closing the gender pay gap is not rocket science – even though recently graduated female rocket scientists earn 89 cents on the dollar to their male peers.

The proposed Paycheck Fairness Act – introduced repeatedly in Congress since 1997 but never passed – would codify many of these remedies at the federal level. And the Trump administration suspended an Obama-era requirement that employers report extensive pay data.

While federal efforts stall, several states, including California, Oregon, Massachusetts, Maryland and New Jersey, have passed their own laws to close the gap.

The economic gains from closing the gender pay gap are huge. Doing so would add about $513 billion to the economy because of the extra income generated, reduce poverty and do a lot to support American families since mothers are the sole or primary breadwinners in about half of them.

Passing the Lilly Ledbetter Act was a start, and now we owe it to American workers to enact laws that close the gap once and for all.