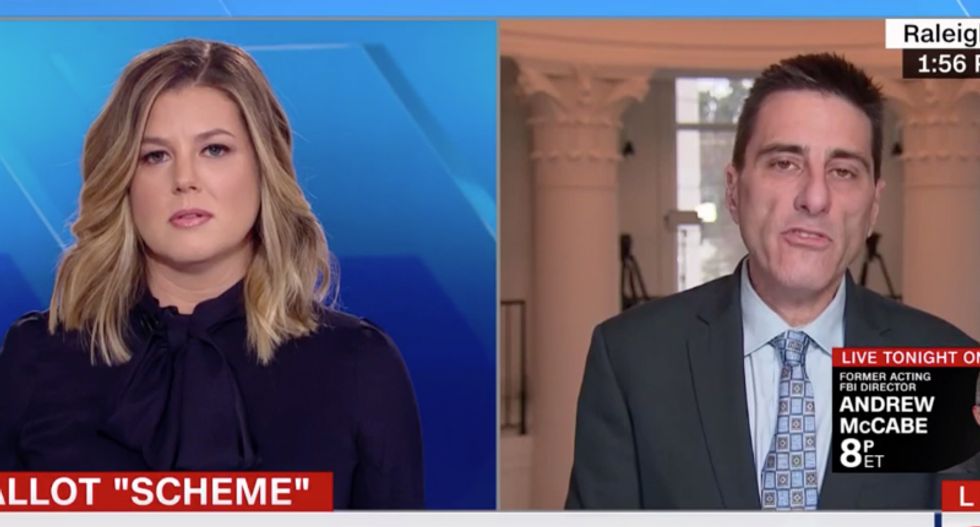 Executive Director of the North Carolina Republican Party Dallas Woodhouse on Tuesday had more than a few special moments on CNN, losing his composure several times as host Brianna Keilar cornered him over new revelations from the probe into election fraud in that state indicating that vote rigging and tampering with ballots was directed by an operative working for the GOP candidate.

Keilar asked Woodhouse,"how you can be so sure that your math is correct," when it was still "unclear how many votes were submitted by the folks involved in this voter fraud conspiracy."

Woodhouse replied that there was "no evidence" that ballots were destroyed or leaked, but Keilar cut him off saying Woodhouse was trying to prove a negative. She then threw his previous statements on the case back at him, running a clip of Woodhouse insisting on new elections if the fraud allegations "rise to the level of turning the outcome", and asked "why the change in your tune?"

A stammering Woodhouse tried to change the subject to CNN's reporting, but it didn't go well as Keilar insisted "let's talk about what you said. You didn't talk about number of ballots, you said if there was fraud." Woodhouse began sputtering as Keilar accused him of "splitting hairs," and continued trying to change misrepresent CNN's reporting.

"Dallas, listen to me -- just listen to me," Keilar said, talking slowly as if to a toddler. "It's unclear how many ballots were turned in. It is also unclear if ballots were destroyed. so how can you be so sure of your math that you would stake your reputation on relying on information from people involved in a voter fraud conspiracy?" Woodhouse insisted that he wanted people who broke the law to be prosecuted, and then said there was no evidence that any ballots had been destroyed. His third attempt at changing the subject wasn't the charm.

"This is damning," Keilar said. "The board of elections stated that there was fraud, and that it was very clear, and that it was intentional." Then she turned back to Woodhouse. "You're talking about a Republican candidate who hired this consulting firm and actually he, with his personal involvement, chose this operative, McCrae Dowless, who was a previously convicted felon" who with his wife was accused of taking out life insurance on someone who was already dead.

"My point is this is the taint on what is going on in this 9th district," Keilar continued, obviously frustrated. "So why not just do it over clean? why are you arguing for when you can't prove the math that you are talking about, why not do it over?"

Woodhouse continued to try to change the subject to the number of ballots, as an unimpressed Keilar told him "that's your opinion."