Sheila Jackson Lee rains hell on Matt Whitaker: 'We are not joking here and your humor is not acceptable' 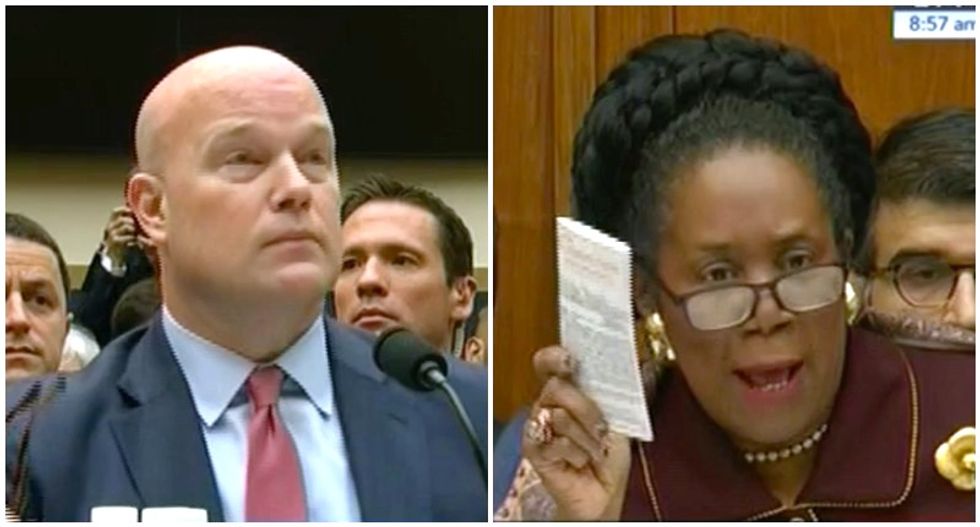 The Texas Democrat told Whitaker up front that she planned to ask him yes-or-no questions, but he insisted on offering more expansive answers -- and House Judiciary Committee chairman Jerry Nadler (D-NY) directed him to comply with the lawmaker.

"Witness will answer the question as asked, please," Nadler said.

The ranking Republican, Rep. Doug Collins (R-GA), complained that "Democrat administration officials" had been allowed to answer questions as they wished, and Nadler fired back.

"The member has only five minutes, I will not allow the witness to stall and waste members' time," Nadler said.

Jackson Lee asked for her time to be restored, and the committee leadership briefly discussed how much she was owed, and Whitaker made a joking reference to his assertion earlier in the hearing that Nadler had run out of time in an apparent effort to avoid a question.

"I don't know if your time has been restored or not," Whitaker said.

Jackson Lee fixed a glare on Whitaker, who sat blank-faced after his remark.

"Mr. Attorney General, we are not joking here and your humor is not acceptable," she said. "You are here because we have a constitutional duty to ask questions and the Congress has a right to establish government rules."