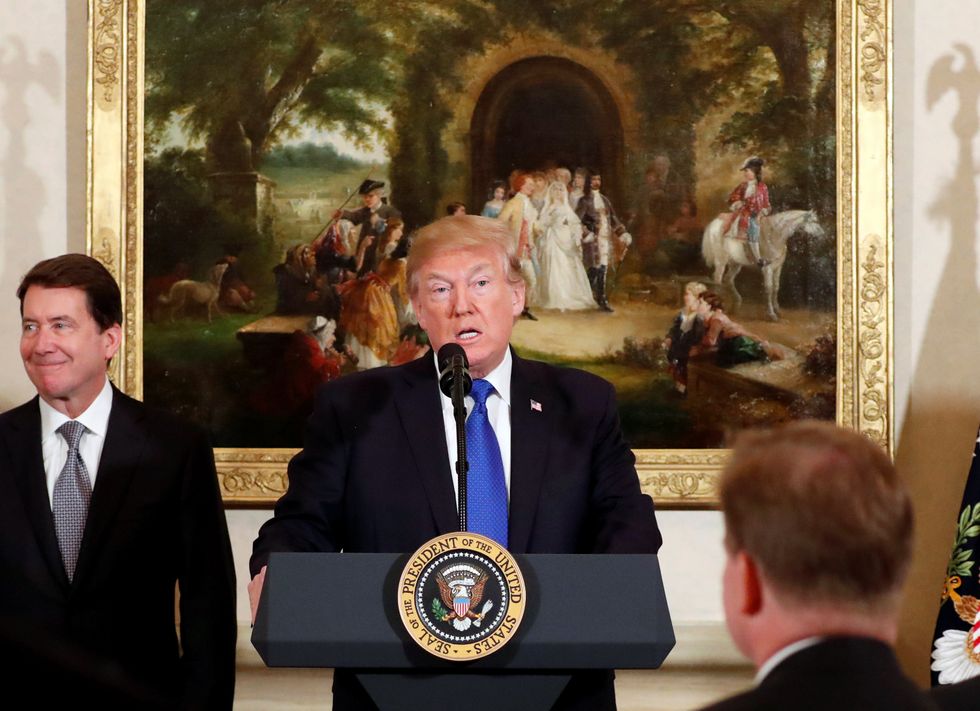 One of President Donald Trump's most signature campaign promises to the American people was that if elected, he would be a great dealmaker. He sold himself hard on the mythology of himself as a successful businessman (when in reality Trump mostly did business by ripping off small-time contractors and declaring bankruptcy) and he told everyone that he could bring that skill to the world stage to stop other countries from ripping us off.

Two years in, and Trump has not lived up to his own hype. On the contrary, rather than make deals, he has spent most of his time tearing them down — and the effect has been to make America less credible, more isolated, and less safe.

Here are six of the biggest moments when Trump ripped up our prior international agreements:

One of the first things Trump tossed out upon taking office in 2017 was President Barack Obama's signature Pacific Rim trade deal, brokered over several years, that would have given the U.S. unprecedented access to markets in 11 countries throughout Asia, Oceania, and the Americas.

The deal was not perfect, and controversial among both liberals and conservatives (Hillary Clinton had also expressed reservations with it). However, it would have been one of the most significant trade deals ever, growing the world economy by $600 billion and the U.S. economy by $200 billion. It would also have been one of the most progressive trade deals for workers and environmental law, and it could have had ripple effects, forcing many countries to update their labor standards. Even Trump tacitly now seems to agree with this, having cribbed much of his NAFTA renegotiation efforts off the TPP's provisions.

After the United States pulled out, the other 11 nations renegotiated the deal and enacted it as the Comprehensive and Progressive Agreement for Trans-Pacific Partnership, which went into effect in late December. The new deal is much the same as the old one — but with America missing out.

The ratification of a global deal to lower greenhouse emissions in 2016 was a massive triumph for humanity. Then Trump got involved.

Trump, who denies the existence of climate change in the first place, has spuriously claimed that the United States is getting ripped off by the deal, that other countries don't have as onerous of requirements, and that it will hurt the energy industry. None of this is true — each country sets its own goals under the agreement. And even oil companies support the deal, putting Trump in a very small minority.

As it stands, the United States is not technically out of the deal yet, and under the terms of the of the accord cannot formally exit until, at earliest, November 2020. Meanwhile, several states and major corporations continue to honor the framework of the Paris Agreement. But Trump's eagerness to exit poses a risk of fracturing the agreement further and encouraging other countries to leave — Brazil's new far-right president, Jair Bolsonaro, campaigned on following Trump's lead and exiting the deal, although he has since said he plans to stay in it. Even that aside, other countries are working to take our place in the fight for climate change, meaning that we are less likely to lead the way on energy innovation.

Trump has been raging at the Iran nuclear deal — formally the Joint Comprehensive Plan of Action — since Obama brokered it in 2015 between the United States, the United Kingdom, France, Germany, Russia, China, and of course, Iran. The agreement forced Iran to cease developing its nuclear program, destroy or surrender much of its material, and submit to inspections, in return for a lift of major sanctions. He finally pulled the United States out of the deal last year, and moved to reimpose sanctions.

Trump is convinced that the government of Iran is secretly violating the terms of the deal and that, despite the rigid inspection regime, the deal is actually helping Iran obtain a nuclear weapon. There is no evidence whatsoever to support this, and his own Director of National Intelligence, CIA and FBI directors all agree that Iran is still following the terms of the deal even after we pulled out. Meanwhile, the other signatories to the deal still want to enforce it and there is doubt that U.S. sanctions will be honored on the world stage.

The effect of all of this will be to erode U.S. soft power, as there is no incentive for hostile states to take America seriously if they will not honor the terms of their agreements.

This withdrawal did not get a great deal of attention, but it was still a problematic change in U.S. policy.

In November 2017, Trump pulled America's status as an implementing country of the Extractive Industries Transparency Initiative, a treaty designed to crack down on corruption in the oil, gas, and mining industries (America is still technically part of the treaty, but no longer an implementing member of it.) The treaty requires countries to publicly report data about revenues from these industries, which tend to be hotbeds of corruption around the world.

The withdrawal from the EITI, which the United States has been a member of since 2014, was prefaced by Republicans in Congress killing the resource extraction rule, a regulation of the Securities and Exchange Commission (SEC) that required extraction companies to disclose how much of their money goes to foreign governments — which may have put us in violation of the terms of implementation.

Without being an implementing member, the United States loses a lot of credibility. The move possibly opens the door to many of the other 52 member states following suit.

Last June, the United States withdrew from the United Nations Human Rights Council, the body that reviews the human rights records of all of the world's countries. Trump's then-U.N. Ambassador Nikki Haley blasted the body as "a cesspool of political bias" and a "hypocritical and self-serving organization" with "unending hostility towards Israel".

There is no doubt that the Human Rights Council, which America has sat on since 2009, has some glaring issues. Just last year, the Philippines gained a seat, despite the fact that they are currently ruled by a despot accused of extrajudicial death squad murders.

Nonetheless, this ought to be a reason for America to want to sit on the council and do its best to assert its own vision of human rights. By abandoning our authority in that role, we are not going to make anything better.

The most recent case of Trump exiting a deal came down on Friday, when he pulled out of the Intermediate-Range Nuclear Forces (INF) Treaty with Russia. A staple of post-Cold War bilateral security policy brokered by President Ronald Reagan in 1987, the treaty prohibits ground-launched cruise missiles with ranges between 310 and 3,420 miles.

The continued existence of the INF has been controversial, with some critics citing examples of Russia cheating the agreement. Nor was this without warning — Trump initially said he would be scrapping the agreement last October, unless Moscow could prove they were in compliance within 60 days, something that a few months of talks failed to demonstrate.

But it is not at all clear that the termination of the deal is a deterrent to Russian President Vladimir Putin. Indeed, it could result in a new arms race the like of which hasn't been seen since the collapse of the Soviet Union, undoing decades of progress drawing down nuclear arsenals. This could be particularly bad news for our allies in Europe, which are within easy range of the kind of intermediate land-based missiles from Russia.