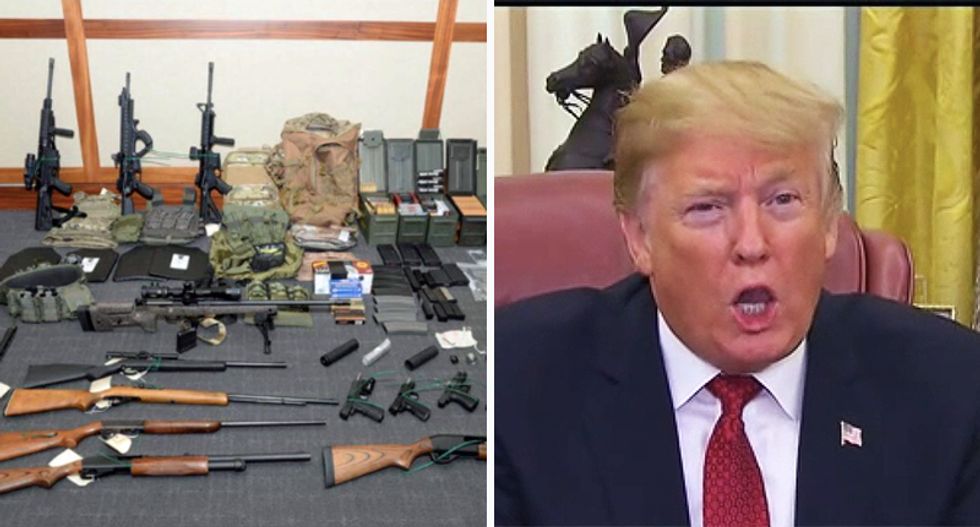 “The defendant is a domestic terrorist bent on committing acts dangerous to human life that are intended to affect government conduct," federal prosecutors alleged in court filings.

Hasson is being held pending the filing of additional charges.

“There is an intent to murder innocent citizens; advocate for white nation; he was doing searches for plotting terror attacks on his government computer while at work; also searched Unabomber and Breveik manifestos,” federal prosecutors said during an arraignment hearing.

Trump had not commented publicly until he was asked about it on Friday by NBC News chief White House correspondent Hallie Jackson.

“Do you think you bear any responsibility for monitoring your language when it comes to that,” Jackson began.

“No, I don’t,” Trump interrupted. “I think my language is very nice.”

Steele was not surprised.

Wallace played a shocking audio clip of right-wing attorney Joe DiGenova on Laura Ingraham's podcast where he declared there is currently a "civil war" in America and that conservatives should buy guns.

"I think we talk about the lasting harm, it's giving God knows what to [Vladimir] Putin in terms of territory and foreign policy giveaways, but I think the conversation on race, it's not even a conversation anymore, it's what Joe DiGenova said it was, it's a war," Wallace noted. "He permitted -- he green-lit -- a war in this country around race."

"If you think about the saying the most dangerous thing he's done, that might be it," Wallace added.

"Who was talking about that? Who was actually agitating for that to happen? Donald Trump's new base," Steele said.

"White nationalists had been agitating for that space to be exploded onto the national scene," he continued. "And then when you've got credible individuals supposedly inside the party and Joe -- I have known him a long time, he's a credible guy -- when he gets out and says we're in a state of war, who declared this war and when do we start fighting it? Do we come to your house first?" he asked.

"Because I want to know where we start this, because if this is the declaration that this president is allowing to be made, then we all need to do a check-down on this, on guys like Joe and others, so we can't sit back silently and accept it," he concluded.