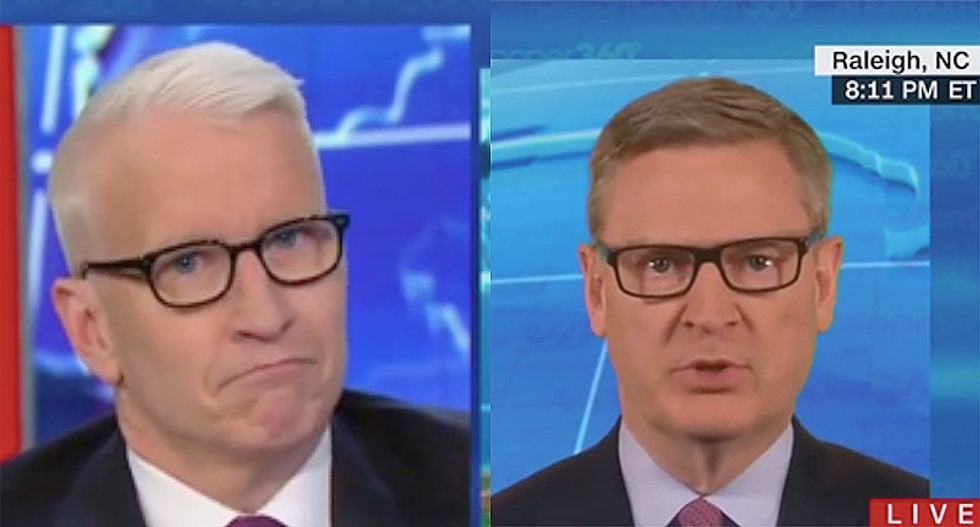 Republican Trumpster Mike Shields struggled to find an excuse for Ivanka Trump surpassing all background checks and clearance qualifications so that she could dabble in national security.

CNN's Anderson Cooper asked Shields if Hillary Clinton had been elected and hired her daughter Chelsea and given her top-secret clearance against objections of intelligence agencies if Republicans would lose their minds.

Shields first tried to pivot to attack Bill Clinton and rant against the Clintons, but Cooper stopped him, saying that none of that has anything to do with this issue. The Trump apologist said that the Trumps ran as a family and they knew that his family would be working in the White House.

"It doesn't bother you that he's seeking funding or having meetings in his business life with folks Middle East leaders, Chinese companies in other words to get funding for his family's company? That doesn't bother you?" Cooper asked.

Shields stumbled, trying to claim that Trump has a right to do it.

"I'm asking you is it appropriate for Jared Kushner to -- on the one hand have business relationships with the same people that he now is apparently dealing with on a diplomatic basis?" Cooper asked again.

Shields never gave a full answer but Democrat Kirsten Powers noted that Republicans would be going "bonkers" if Chelsea Clinton was given the same treatment as Ivanka.

She went on to say that she doesn't understand why Shields can't seem to admit that it's a problem.

Shields then said that when former President Bill Clinton was in office, he put his wife in charge of policy issues.

"And that went over well," Cooper said sarcastically.

Clinton's wife was a first lady, and traditionally first ladies have their own policy issues. Hers was children and health care, Michelle Obama's was about children's fitness and health, Laura Bush's was literacy and Melania Trump's is opioid abuse and bullying. None of those women had foreign policy issues they handled for their president husbands and none were involved in national security issues.

Legal analyst Jeffery Toobin wondered why the intelligence agencies felt that the two Trump children weren't adequate enough to have such clearances. He noted that something clearly was flagged by the FBI and CIA and wanted to know what it was.

It was reported last week that son-in-law Jared Kushner bypassed concerns from the FBI and CIA about him having access to state secrets. Now it seems President Donald Trump's daughter is facing the same. The White House has refused to release any of the information about Kushner and presumably they'll say the same about the president's daughter.