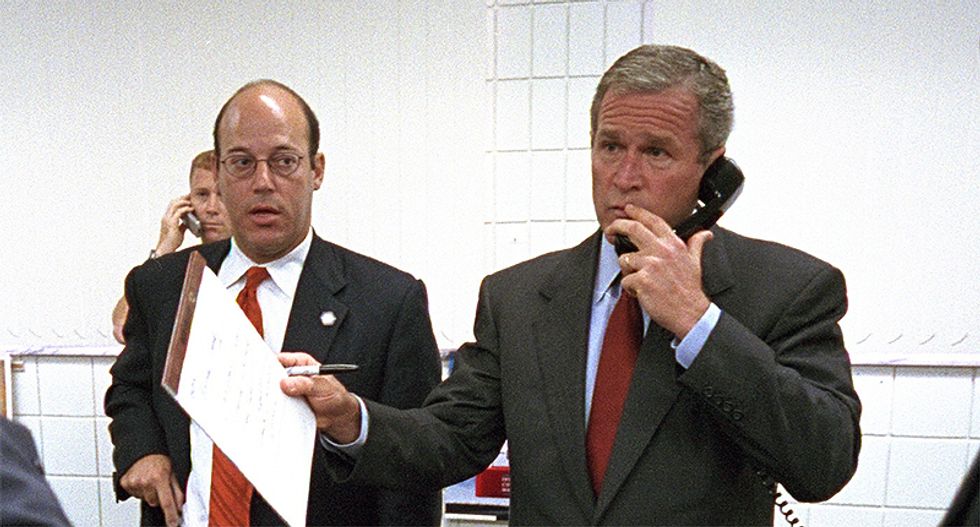 Former George W. Bush spokesman Ari Fleischer attempted to justify the invasion of Iraq, but a variety of experts and others who remember the era fact-checked his efforts.

The former White House official insisted the anti-war slogan "Bush lied, people died" was itself a lie, claiming the Bush administration had been the victim of a "major intelligence failure."

"The fact is that President Bush (and I as press secretary) faithfully and accurately reported to the public what the intelligence community concluded," Fleischer tweeted. "The CIA, along with the intelligence services of Egypt, France, Israel and others concluded that Saddam had WMD. We all turned out to be wrong. That is very different from lying."

The fact is that President Bush (and I as press secretary) faithfully and accurately reported to the public what th… https://t.co/V2bklrIPb7
— Ari Fleischer (@Ari Fleischer) 1553046367.0

Fleischer's self-serving justifications were called out as flatly false by CIA analysts, historians, journalists and numerous others, who provided examples of perfidy by former Vice President Dick Cheney, former Secretary of State Colin Powell and other Bush administration officials in the push for war.

@AriFleischer Remember the Blix commission? They weren’t finding WMDs at the sites that were flagged. You had them… https://t.co/U7XRnSZfAI
— 📚orygoon🚲 (@📚orygoon🚲) 1553054074.0

@AriFleischer Could you please make a trip to the Hague and make this argument there?
— Damien Miller (@Damien Miller) 1553084826.0

@AriFleischer Even if Saddam had had WMD, you never considered the possibility of the United States losing the war,… https://t.co/yueCQbKy8R
— Wilson Dizard (@Wilson Dizard) 1553083330.0

@AriFleischer I was a grad student and all of Middle East Studies (minus Daniel Pipes and that ilk) were arguing ag… https://t.co/F30vNb3Hr5
— Allouttathyme (@Allouttathyme) 1553055096.0

@AriFleischer Overwhelming evidence you lie: “There was no such ‘intelligence failure.’ On the contrary, there was… https://t.co/96cxC1fVin
— Jeffrey Kaye (@Jeffrey Kaye) 1553076680.0

@AriFleischer You pushed Helen Thomas out of the way - we saw this, because she asked unconfortable questions. An… https://t.co/1J22GVYmbz
— Miguel de Icaza (@Miguel de Icaza) 1553088973.0

@AriFleischer Tens of thousands of children were murdered by our bombs because of your bullshit. The fact that you… https://t.co/UU66eGieEQ
— Guy Endore-Kaiser (@Guy Endore-Kaiser) 1553053370.0