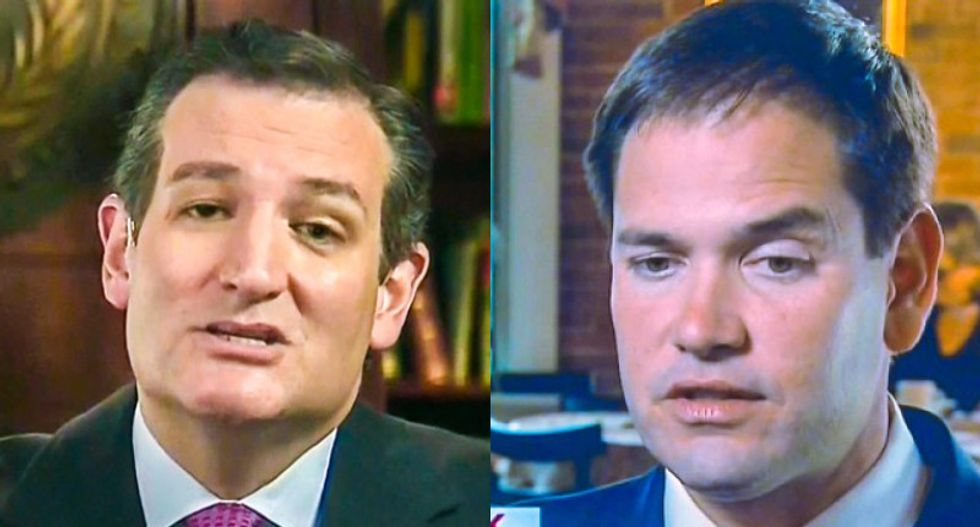 With only four Republican senators expected to support a resolution condemning Donald Trump's emergency declaration to fund his border wall, a conservative critic of the president lambasted the 49 other GOP senators who are falling in line with the president despite many expressing reservations.

Writing at the Washington Post, columnist Jennifer Rubin said none of those other senators will be remembered for being courageous, saying, "These are not political giants."

According to the conservative pundit, "Such lawmakers will do just about anything to stay in the right wing’s good graces, which they perceive as essential to their retention of power. Some like [GOP Sen. Ted] Rubio had brushes with heresy (e.g., on immigration) but now have returned to servility."

Highlighting a New York Times report that stated, "Senators Marco Rubio of Florida, Ted Cruz of Texas, and Mike Lee of Utah have all voiced concern on the constitutional question, though none of them has explicitly promised to overturn the emergency declaration,” Rubin unloaded on them.

"The overwhelming number of Republicans do not believe they can defend themselves if they were to act independently — or fear even risking it," Rubin accused. "They generally know what Trump is saying is bunk (whether it is Trump’s latest conspiracy theory about the FBI or some uber-theory of executive power or his fear-mongering about immigrants), but they understand Trump’s grip on the base and figure it’s easier to echo Trump, snow voters whom they consider incapable of independent thought and just regurgitate the same garbage Trump spews."

She then wrote, "If they are remembered at all, it will be for their docility in the face of an authoritarian president and for their willingness to disregard their oaths for the security of another term or a gig on Fox News after retirement or a cheesy award from some right-wing group," before summing the cowardly Republicans up.

"These are cheap dates and small men" she concluded.