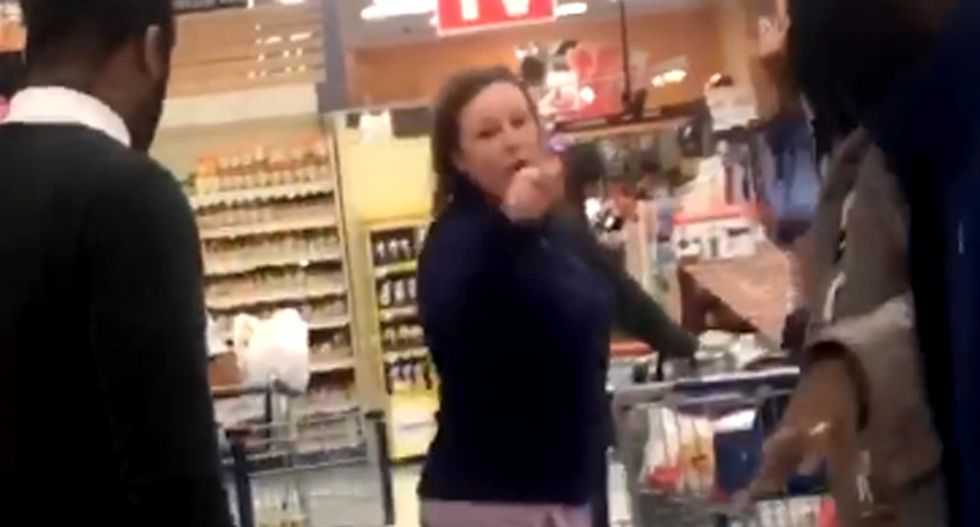 A Connecticut woman lost her job after her racist tirade in a supermarket was caught on a viral video, and she blamed the black man for the slurs she used against him.

Corrine Terrone was quickly fired from her job as a clerk with Hamden schools after the Friday night incident was widely shared on social media, and police released a 911 call she made during the incident at an East Haven supermarket, reported WTIC-TV.

The video shows Terrone using the N-word multiple times toward a black man in about one minute, but she blamed the man for her outburst because she said he swore at her.

"I was walking down the center aisle in front of the cash register," Terrone told police, "and I turned around to my daughters, and I said, "Oh, Jesus Christ.' The man, in his little scooter, said, 'Are you talking to me, (expletive)?' And I said 'no (N-word), I'm not.'"

The white woman dared the black man to put his hands on her, and she chased after him when he walked away.

Terrone told police she and the man had spat at one another during the confrontation, and she threatened to press charges.

She demanded police come to her New Haven home to investigate, then swore at the officer who answered the call because he said East Haven police did not have jurisdiction there.

"I'm not going to sugarcoat what I said," she told police.

Police said no complaint had been filed against Terrone, and they asked the black man to come forward to assist the investigation.

Murgo said the woman could potentially be charged with disturbing the peace or assault, based on video evidence of her spitting on the man and a black woman, and police may consider other charges.

“The video sums it up,” Murgo said. “We know what happened.”

“We don’t know what’s going on, but that message may be getting relayed to the children and we’re mandated reporters,” Murgo said.