Chris Wallace gives Giuliani hammering for the ages over Mueller report: 'Who made you God?' 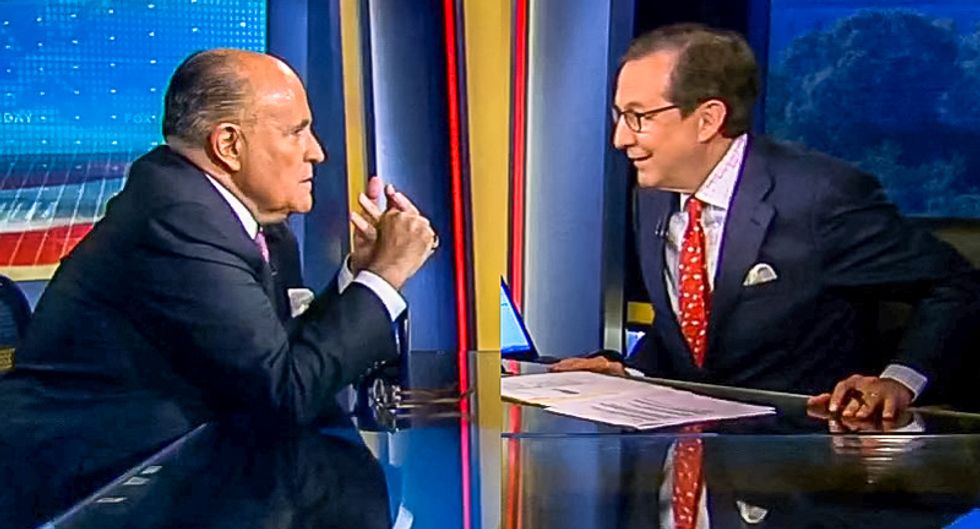 Giuliani began the interview by complaining about Wallace's first question.

"What you're doing is you're taking the Mueller's report, which is a prosecutor's version of what happened, you're giving it full credit and you're not giving me a chance to explain the other side!" the president's lawyer charged.

"I'm asking you about the other side," Wallace pointed out.

"It's pages of calumny, lies and distortions," Giuliani said.

"You think that's what the report is?" Wallace clarified.

After giving Giuliani a moment to explain Trump's firing of FBI Director James Comney -- which led to the special counsel's investigation -- Wallace tried to move on.

"You've got to give me the opportunity to ask you a question," the Fox News host said as Giuliani continued talking over him. "I'm here to ask you some questions [about the report]."

"One of your arguments is that obtruction of justice could not have happened because there is no underlying crime," Wallace continued. "The special counsel said what you just said is not true."

"When did Mueller become God?" Giuliani exclaimed. "We're talking about something that didn't happen. There was no obstruction. Nothing was denied [Mueller], nobody crushed cell phones like Hillary [Clinton] did. Nobody deleted 33,000 emails like Hillary's people did. And nobody bleached a server like Hillary did."

Wallace noted that Trump provided insufficient answers to Mueller in a written interview, saying he did "not recall" 37 times.

The Fox News host went on to remind Giuliani that Trump accused Clinton of a crime when she said that she told Republicans she couldn't remember details during congressional testimony.

"Hillary Clinton was guilty of the underlying crime," Giuliani insisted. "She did crush the cell phones."

"Who made you God as you said about Mueller?" Wallace shouted back. "You're saying, who made Mueller God, and now you're saying whether she was guilty or not."