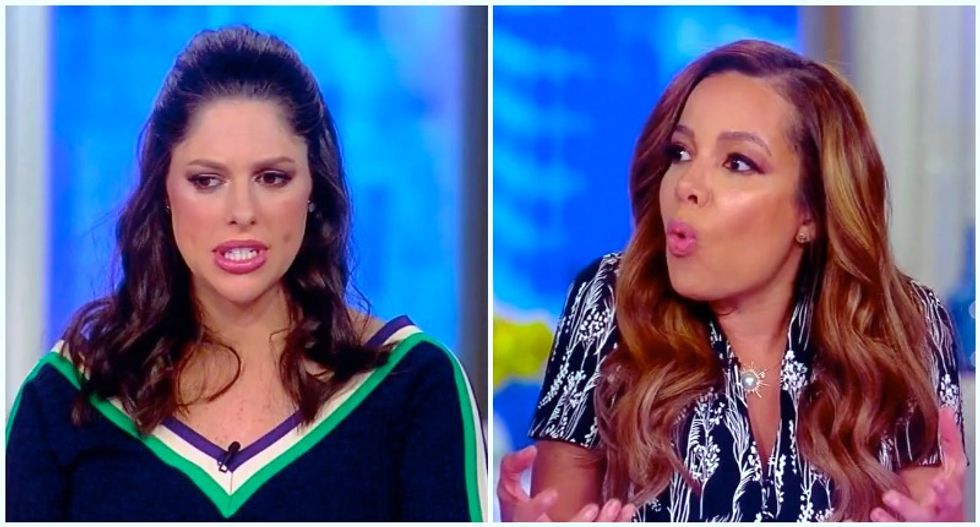 "The View" co-host Abby Huntsman tried to reframe reports about a suspicious Chinese national gaining access to Mar-A-Lago as a Secret Service scandal -- but she was quickly set straight by Sunny Hostin.

A Chinese woman carrying four cell phones, two passports and a thumb drive containing malware was arrested Saturday at President Donald Trump's private Florida club, and Hostin said this was another troubling instance of unsavory characters gaining access to the president at the resort.

The woman was visiting Mar-A-Lago for an event organized by another Chinese woman, Li "Cindy" Yang, who was recently charged in connection with an alleged human trafficking ring who has been steering wealthy clients to the president's club -- and co-host Meghan McCain seemed unclear on the details.

"There's evidence -- there's direct evidence -- she has been charged," McCain asked, "that President Trump is selling access to the White House through this woman?"

Co-host Ana Navarro clarified that Yang had not been charged in connection with her activity at Mar-A-Lago, and Huntsman then jumped in to further complicate matters.

"Trump wasn't the Secret Service," Huntsman said. "She had four cell phones with her and caught with malware. China, more than Russia, what they're capable of doing is one of our greatest security risks."

She roped in another recent Trump administration scandal revealed by a whistleblower, who testified the White House had overruled national security professionals to get security clearances for officials who had been disqualified for various reasons.

"This is why who has security clearance matters," Huntsman said. "All she had to do was clip the malware onto Jared (Kushner)'s computer."

Then she tried to let Trump off the hook for the Mar-A-Lago security breach, and wipe away concerns about foreign nationals, potential spies and others paying their way into the club to gain an audience with the president.

"To blame Trump for the Secret Service lack of catching this woman is a bit of a stretch for me," Huntsman said.

But Hostin quickly interjected to say she was missing the point.

"I don't think anybody is blaming Trump for the Secret Service," Hostin said. "The Secret Service certainly caught her. The bottom line is, he's put this into place. He's using Mar-A-Lago as this winter White House, and he's selling access. It's against the law."