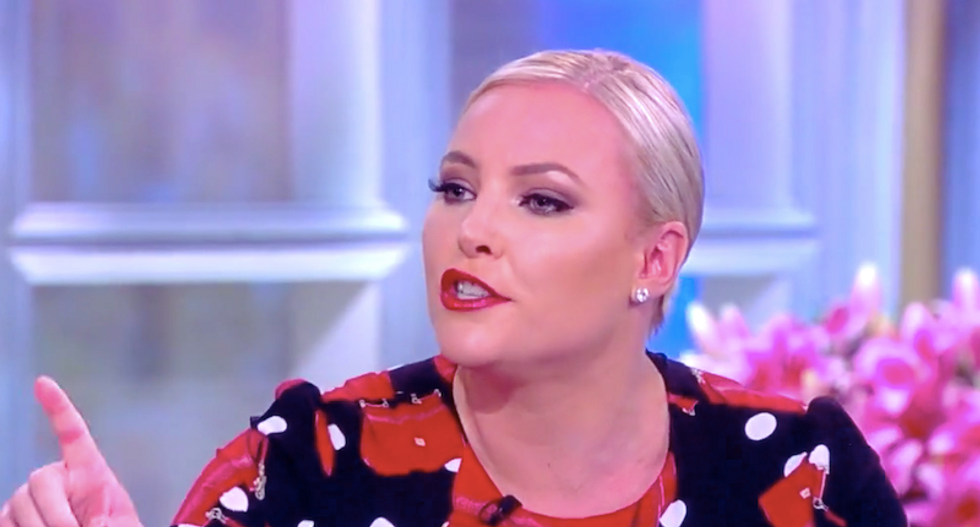 "The View" co-host Meghan McCain blamed "the worst president in history" on Democrats, and said they would give Donald Trump a second term unless they let go of the Russia probe.

McCain wondered why Democrats weren't willing to take a political risk and impeach Trump -- whose approval rating fell to 37 percent -- over the findings by special counsel Robert Mueller, which she wrote off as "anti-climactic."

"What's the problem?" McCain said. "He's the worst president in history. According to our legal analyst (Sunny Hostin), there's so much in this report that is damning. Then what's the problem? Why is everyone so nervous about 2020? If this is the nail in the coffin --"

Co-host Joy Behar cut in to say many Americans were worried Russia would steal the next election, too, if Trump wasn't held accountable.

"To me, that sounds irrational," McCain said. "That's an irrational answer to this question I just presented."

"Unfortunately for Democrats, you got to get out there and win over the voters you lost in the middle of the country," she added. "Thank you for clapping, whoever that is. My one fan, ma'am, thank you so much."

Hostin asked her conservative colleague what Republicans would do to hold Trump accountable, and McCain cast blame for the president's wrongdoing on everyone who didn't believe he could win the election.

"I always took Trump seriously, I always did you can go back and check the receipts when I worked at Fox and on my radio show, I always took Trump seriously," McCain said. "This mess I blame the left as much as the right, and the demonizing of all conservatives in this country, all Trump supporters, in every way. You're getting him re-elected. To say that all Republicans are bad, and Republicans have to hold his feet to the fire."

Hostin asked McCain to comment on Trump's behavior documented in the Mueller report, and she insisted that her late father's opposition to Vladimir Putin gave her the authority to pronounce Trump had been cleared.

"It came out that he didn't collude!" McCain said. "I accepted the Magnitsky Award in London on behalf of my father. I'm someone who for a long time been speaking out about Russia."

Hostin asked her to comment on 11 instances of possible obstruction of justice detailed by Mueller, and McCain snapped at her.

She continued shouting all the way into the commercial break, which host Whoopi Goldberg quietly introduced as McCain ranted.

"Then you got no problems, he's out of office," McCain said. "Then Republicans are crap and it doesn't matter."