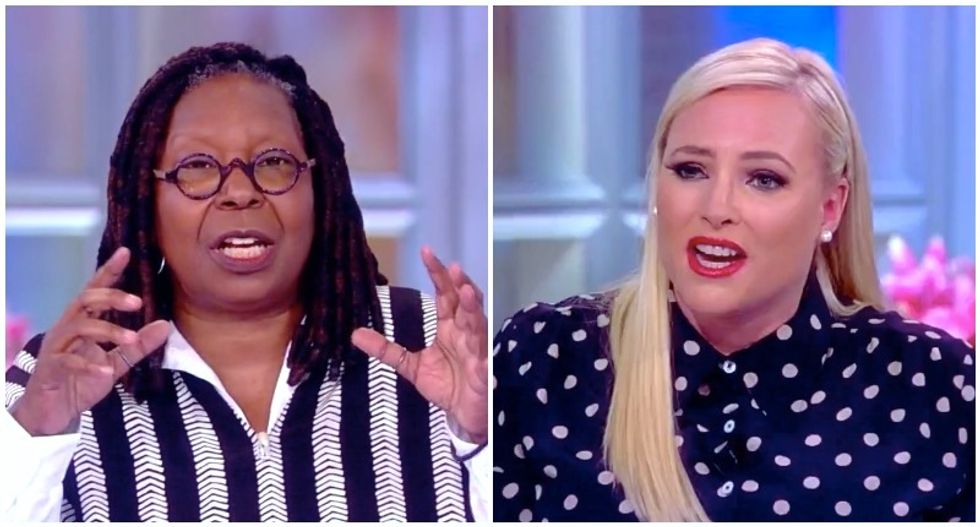 "The View" co-host Meghan McCain could not wrap her head around the idea that the Boston marathon bomber might some day be released from prison, and a conversation about prison reform was derailed by her shouting about terrorism.

The panelists discussed a Democratic town hall meeting Monday night, where Sen. Bernie Sanders (I-VT) said he believed even Dzhokhar Tsarnaev should be legally allowed to vote while he served a death sentence for the 2013 bombing.

"I think is disgraceful," McCain said. "RNC, turn that into an ad. It's not hard to say they should not only be punished, but god forbid they should have any rights any of us had or someone who commits a low-level crime like smoking pot, it is not hard to put lines between terrorists and people who submit low-level crimes, and I was upset about it because, just one second, if Democrats want to drag everybody this far left, this is why people like me are so upset and so disenfranchised with how extreme this is."

"It's not hard to say the Boston terrorist was a psycho lunatic who is a threat not only to national security," she added, "but shouldn't be allowed the right to vote in any election."

Host Whoopi Goldberg proposed a hypothetical scenario asking if the bomber should be allowed to vote if he was released from prison, and that sent McCain on another tear.

"Whoopi, he killed people!" she said. "He is a terrorist. He's a radicalized terrorist. He should never get out."

Goldberg agreed he would probably never be released from prison, but she tried to move the conversation on to the next part of her question -- about voting rights for felons -- but McCain would not let it go.

"I'm trying to tell you what Bernie Sanders said is going to be turned into a clip that will be -- it upset me this morning," she said, turning to co-host Abby Huntsman. "Abby and I -- Abby and I didn't have brothers that served multiple times. I didn't watch him deployed when he was 19 to fight this crap, to have them come here and give (them) the right to vote."

The other panelists tried to move on, but McCain got in one more paragraph diatribe before Goldberg sighed and granted a frantic producer's plea for a commercial break.

"For me, I would appreciate it if Bernie Sanders and Kamala Harris said there are true monsters in this world," McCain said, "and true monsters are domestic terrorists, which these guys were, radicalized here, people like that not only shouldn't get the right to vote, but shouldn't have the right to have anything in this country. They killed Americans and they were radicalized."