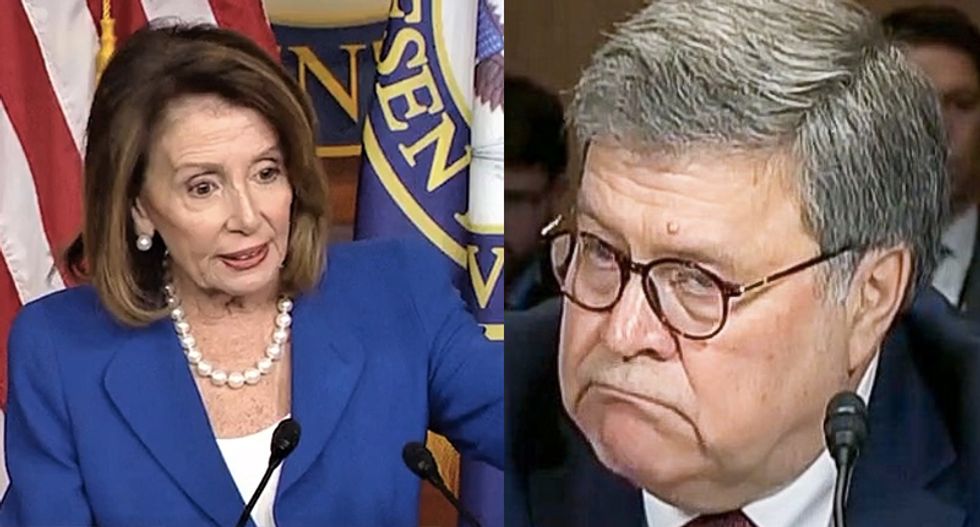 Attorney General Bill Barr went to Capitol Hill Wednesday and thought it might be fun to "poke the bear."

Barr was ordered to appear in the U.S. House of Representatives to testify about his interactions with special counsel Robert Mueller and why the two disagreed on the summary that came out of the attorney general's office. When he informed Congress he refused to appear and wouldn't follow a subpoena, the Judiciary Committee moved to hold Barr in contempt.

That contempt vote now moves to the full House for a vote.

When Barr encountered Speaker Nancy Pelosi (D-CA) Wednesday at a law enforcement ceremony, he asked her if she "brought your handcuffs."

According to New York Times Congressional reporter Nicholas Fandos' interview with a bystander, Pelosi smiled and told Barr that the Sergeant at Arms was there should an arrest be needed. Barr laughed and walked away.

It's unclear if the House will go far enough to have the Sergent at Arms arrest Barr and put him in the small jail that is located in the basement of the Capitol. Former and current Democratic members have suggested it, however.

“Attorney General Barr’s decision to mislead the public in his testimony to Congress was not a technicality — it was a crime,” Pelosi said last week.