Trump Jr is using his dad's playbook to keep from being arrested -- and he's in for a big surprise: ex-US Attorney 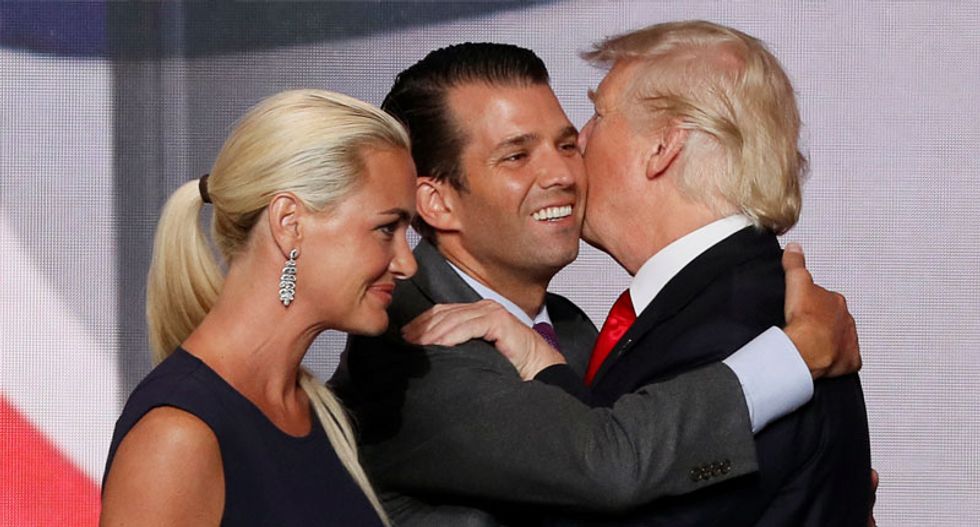 Writing at the Washington Post, former U.S. Attorney and Deputy Assistant Attorney General Harry Litman, said Donald Trump Jr. is using the Trump family playbook to avoid being hauled before a Senate Intelligence Committee -- and possibly facing criminal charges -- and is about to get a rude awakening.

According to Litman, there are hard and fast rules that the Trumps play by, but in the end, Don Jr doesn't have the protection of being a sitting president to lean on to keep from being indicted.

"The first tenet: Feign cooperation and practice intransigence. Trump Jr. is reported to be 'exasperated' and the president 'surprised,' because ostensibly Junior already has cooperated extensively," Litman writes. "Trump Jr.’s stance was of a piece with his father’s: trumpet full cooperation with the probe even while doggedly, and successfully, eluding all efforts to have him testify or even speak cooperatively with the special counsel."

"Like his father, Trump Jr. has zero regard for the public need for his testimony," he added. "The Intelligence Committee is not merely duplicating Mueller’s work, which was fundamentally a criminal probe. The Senate’s lookout is, as committee member Sen. Marco Rubio (R-Fla.) explained, 'an intelligence investigation about the Russia threat and about the way our agencies performed.' It is arrogant of Trump Jr. to treat that vital work as an irritant he can ignore."

"Furthermore, whether Trump Jr. lied in his prior testimony is an entirely legitimate and important topic for any congressional investigation," he added. " That brings us to the fourth tenet: Lies don’t matter. Trump Jr.’s exasperation is particularly shameless if he previously gave a false account to Congress, as well as to the American people, in his accounts of the Trump Tower meeting. (Remember how they said it was all about the Magnitsky Act and adoptions from Russia, until inculpatory emails emerged?) That possibility is sufficiently concrete to merit further investigation."

The attorney continued, "The fifth and final page from the Trump playbook: profess outrage, however brazenly, and attack the good faith of the investigators at every turn. As with the president’s attacks on Mueller and the upper echelons of the FBI, party affiliation, reputation for integrity, and legitimacy of the inquiry are all of no moment: any effort even to question the probity of a Trump must be borne of deep-state corruption."

"With the acquiescence of Republicans in Congress, who know that it is not true, that toxic party line has worked surprisingly well. But it may not be enough to close the books on Trump Jr." he concluded.