Jewish Americans will never vote for Trump no matter how much he sucks up to Israel: columnist 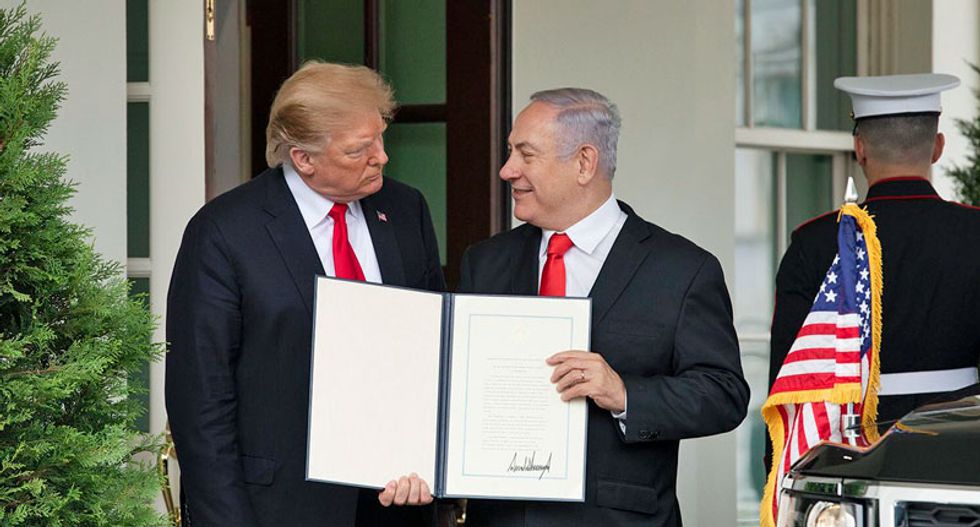 In a column for the Washington Post, conservative columnist Jennifer Rubin disabused Donald Trump of the notion that he will ever gain the support of Jewish voters because they find his conduct appalling.

Under a headline, "American Jewish voters still despise Trump," Rubin points out that Trump has failed in two years to get Jewish voters to consider him -- based upon recent polling.

"The Jewish Electorate Institute’s latest poll confirms what those who closely follow the Jewish community and political opinion about Israel have long known: American Jews remain among the most anti-Trump religious groups," she writes, adding, "While the president’s support for Israeli Prime Minister Benjamin Netanyahu’s policies might endear him to evangelicals (his core base of support), it does absolutely nothing for him with American Jews."

According to the poll, "Nearly three-quarters (73 percent) of Jewish voters believe Jewish Americans are less secure than they were two years ago, 71 percent disapprove of the way President Trump has handled anti-Semitism, and nearly 60 percent believe that he bears at least some responsibility for the shootings at synagogues in Pittsburgh and Poway."

According to Rubin, disgust with Trump runs deep for a multitude of reasons and that his friendship with Netanyahu is not a plus -- adding that he is wasting his time if he wants the Jewish vote.

"In short, as a religious minority, perpetual immigrants in history due to widespread persecution, who deeply value civil liberties and the rule of law, American Jews could barely imagine a worse president than Trump," she lectured. "He offends their core values and cultivates an atmosphere that endangers them. Unfortunately for Trump and his hypnotized Republican Party, they also turn out to vote in large numbers."