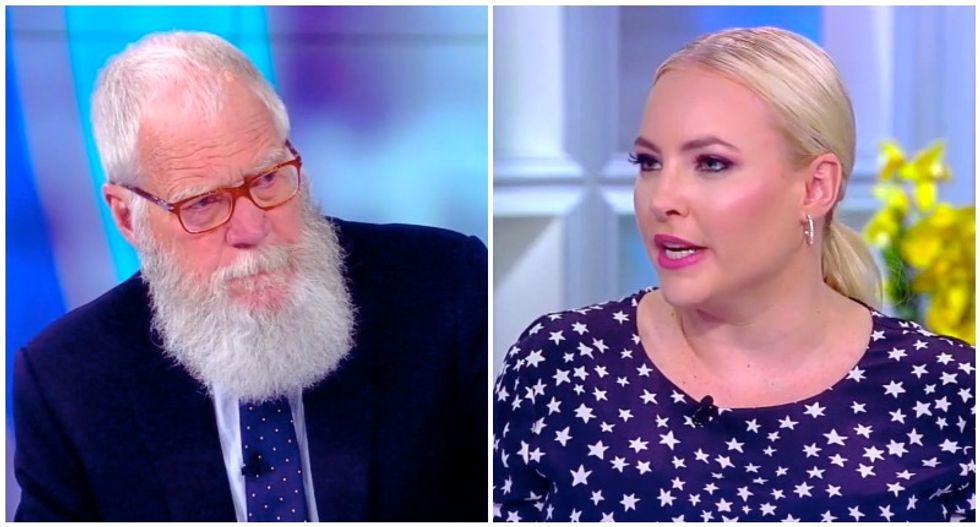 "The View" co-host Meghan McCain begged David Letterman to agree that late-night talk show hosts were unfair to conservative women like herself.

McCain was taken to task earlier this month by NBC's Seth Meyers, which prompted a Twitter meltdown by her husband and then another round of late-night mockery by HBO's John Oliver, and she asked the retired talk show host to take her side.

"Mr. Letterman, we had Jay Leno on recently," McCain said. "He tell us he doesn't miss late night at all because he thinks it's too politically one-sided and wanted it back when you could, quote, 'humiliate' both sides equally."

Letterman, who retired from CBS "Late Night" in 2015, didn't quite have the same complaint with political comedy.

"Jay would do the kind of show Jay would like to do," he said, "and I feel like with things going on, current events seeming what they are, not seeming, actually being what they are, I would have to constantly be on the attack, and I'd be fatigued but I would constantly being going at the easiest target, because that makes your job much easier."

"Now the great thing about doing it that way is, if you keep attacking people and attacking people, you get folks from the other side rarely to come on, and then you can go at it head-to-head," Letterman added. "I'm not sure how I would be able to do -- make fun of both -- I know that historically that's what Johnny did. Johnny Carson, he would play it right down the middle."

McCain pointed out those were "safer" times, politically, and Letterman agreed to a point.

"Yes, but things are so fraught now that it's hard," he said, "and I think people have done pretty well going after one side, but then I understand how that also could alienate part of the audience, so I agree what Jay is saying, but for me, I don't think I could operate that way."

Letterman didn't exactly rush to her side, but he seemed to make McCain happy by flattering her father.

"I would try to, yeah, because if the person demonstrated -- courage is the wrong word, when talking about going on a late-night TV show -- but if there was a difference in ideology I would respect that person and there might be a tussle," Letterman said.

"But still, like with your father," he added, "and this is pre-vigorous divisional days in politics -- well, that doesn't make sense but you know what I'm talking about. Before Trump, that's what I'm trying to say -- before Trump. He came on and we could go at each other if we wanted to and i think that's a pretty healthy thing."