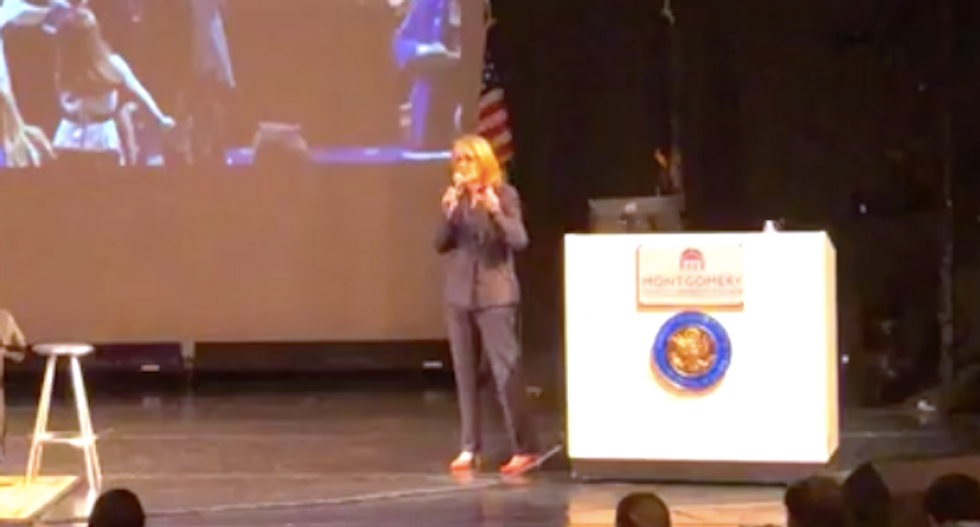 Impeachment came up about 10 minutes into a town hall held by Rep. Madeline Dean (D-PA) in suburban Philadelphia.

The event had been scheduled before special counsel Robert Mueller gave his first public remarks about his 22-month investigation of President Donald Trump's campaign ties to Russia and possible obstruction of justice, and Dean's constituents wanted to hear more from her about impeachment, reported The Daily Beast.

"I wondered whether anybody would bring that up," Dean said, drawing laughter.

But Dean made clear that she wasn't joking about launching an impeachment inquiry: "The facts are accumulating in such an outrageous way."

Dean joined fellow Pennsylvania Democratic Rep. Mary Gay Scanlon last week in calling for such an inquiry, which would start on the House Judiciary Committee they each sit on.

Mueller made clear that his office was unable to charge a sitting president under Department of Justice regulations, and he seemed to be asking Congress to investigate the evidence of obstruction his investigation turned up.

“We are faced with the most indecent president of our lifetime,” Dean said, drawing raucous cheers from the audience.

The lawmaker explained how the White House had thwarted congressional efforts to investigate ignoring subpoenas and blocking current and former officials from testifying or turning over documents -- and Dean said they must exercise their constitutional authority.

“I believed I had to say, enough is enough,” Dean said. “We should open up an impeachment inquiry.”

Dean is among 40 lawmakers -- including Republican Rep. Justin Amash, of Michigan -- to call for an impeachment inquiry, but House Speaker Nancy Pelosi (D-CA) seems unwilling to take that step, and Mueller's statement hasn't nudged any Democratic lawmakers off the fence.

“There isn’t anything new now,” one House Democratic aide told The Daily Beast. “All Mueller said is what he said in the report, just in person.”

But the positive response Amash got at his town hall event earlier this week showed congressional aides there is a public appetite for impeachment, and Dean found a similar response back home with her constituents.

“I hear congressional representatives on TV pretty frequently say that, when (they) go to town halls, that’s not what people are talking about,” said Sam Seplow of Cheltenham, who first asked Dean about impeachment. “It’s a huge interest of mine.”