Road to measles elimination is predictable, but can be rocky 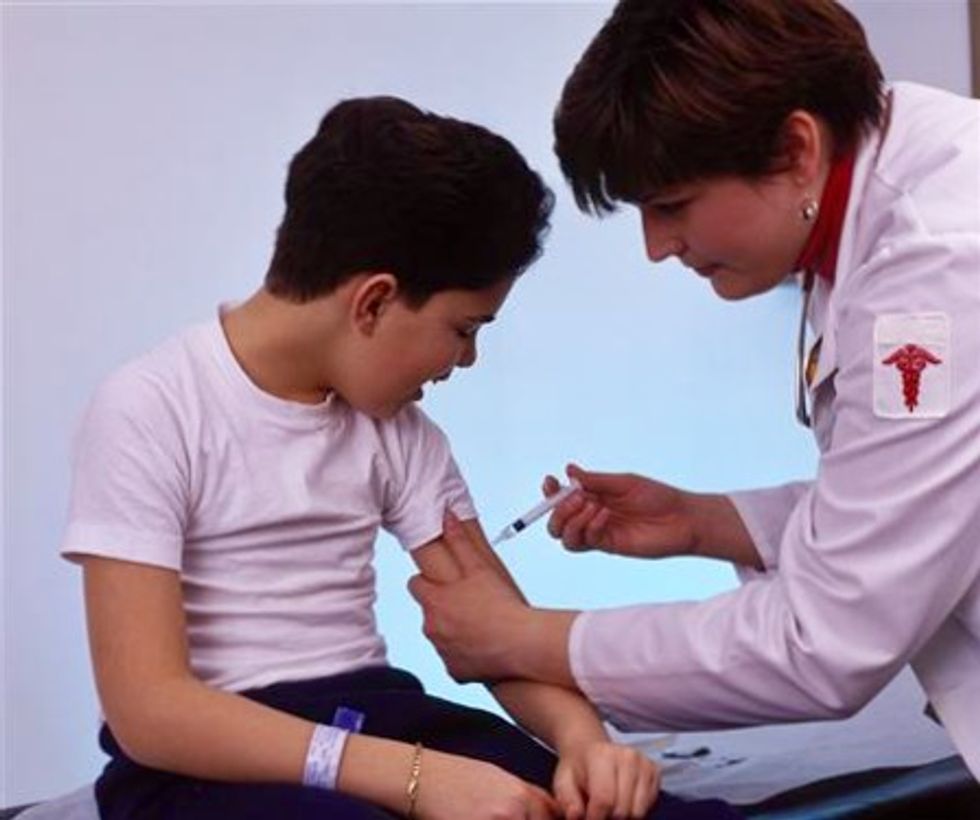 A boy gets a vaccine from a nurse in a handout photo. REUTERS/Newscom

The United States has seen more measles cases so far in 2019 than in any year since elimination was declared in 2000 – meaning the disease is no longer endemic in the country, spreading constantly throughout the year. This year’s American outbreak is dwarfed by those in Ukraine, Philippines, Madagascar, the Democratic Republic of Congo , and Venezuela and Brazil, which have recorded tens of thousands of cases each. Measles symptoms include high fever and a full-body rash, and the infection can be fatal or limit the body’s ability to fight off other infections.

Each of these outbreaks is individually difficult to predict. But our research team has found that big year-to-year swings in the number of measles cases as a country approaches elimination are to be expected. By analyzing the patterns of measles outbreaks in Africa and the Americas since the 1980s, our multi-institution team of biologists and epidemiologists has identified a general pattern of measles infection over time as countries increase vaccination coverage and as birth rates decline.

Characterizing this trend, which we call the “canonical path to elimination,” means we can pinpoint the current positions of various countries along the path. Health policymakers can then prioritize where to focus, allocating appropriate solutions to help countries that either need to move farther down the path or simply hold on to their previous progress toward the end of measles.

What decades of data show

Though the measles vaccine was first licensed in 1963, how quickly it entered use has varied across the world. In 1978, the U.S. set a formal goal to eliminate measles, and since 2012 all World Health Organization regions have adopted goals for measles elimination.

At first, when a country begins to tackle the disease, the average number of cases decreases. At the same time, though, outbreaks become more variable from year to year. That is, one year might see almost no cases of the disease, while the following year has several hundred, or several thousand. This year-to-year variability is largest once the average number of cases drops below about five cases per 100,000 people in the population. Once a country hits that point, measles becomes both less common and less variable, signaling the final stages on the road to elimination. 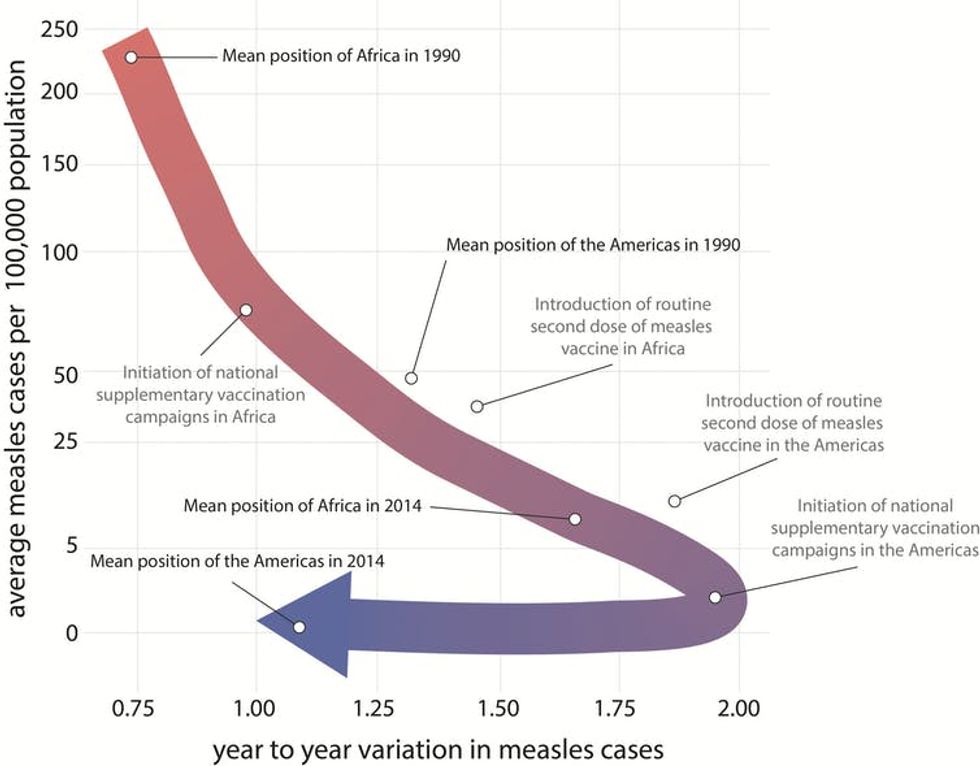 Though they progress at different rates, countries tend to follow the ‘canonical path to elimantion.’ The number of measles cases initially declines while the year-to-year variability in outbreaks increases. Once a country turns the corner, measles cases are rare and the variability also decreases.

This general trend has important implications for countries on either side of that critical five cases per 100,000 tipping point.

Countries that haven’t yet reached that point, like DRC and Madagascar, can expect more variable outbreak dynamics as their vaccination programs continue to improve. Anticipating the likelihood of more variability year to year can help to plan appropriate contingency responses for when outbreaks do occur.

For countries that have already passed this tipping point, like the U.S. and Venezuela, backsliding vaccination rates will likely move the dynamics backwards on this canonical path. Rather than seeing a gradual increase in measles cases that would signal concern, these countries would first see a dramatic increase in the year-to-year variability in measles cases, with large outbreaks like the ones they’ve experienced in the last few years. That increased annual variability can be disruptive to public health systems since it requires dramatic shifts in funding and policies to contain outbreaks when they happen.

Moving along a known path

Identifying this general trend over time means that health policymakers now have a consistent way to identify where countries lie on the path to elimination, relative to the low measles/high variability tipping point. They can also see which direction countries are going – improving or backsliding – and how fast they’re moving. Notably, the path to elimination illustrates that as countries advance toward the tipping point we expect to see a slowdown in the rate of decline in average measles cases.

Looking to countries, and regions, that have moved quickly down the path to elimination can help public health officials identify policies that speed countries past the tipping point.

For example, countries in the Americas, on average, moved faster along the path between 1990 and 2005 than any other region. These rapid gains coincided with the rollout of a second routine dose of measles vaccine, from one country in 1990 to over half of countries in 2005, and declining birth rates.

Between the early 2000s and 2010, countries in the African region began to accelerate along the path to elimination – moving faster than any other region between 2005 and 2012. This time frame corresponds to a period of expanded nationwide vaccination campaigns. Countries increased access to vaccination through intense community-based vaccine distribution that provided new opportunities for children traditionally missed by clinic-based routine vaccination.

Key countries’ progress along the canonical path. Lines rising over time mean a nation is moving closer to elimination. Since 2012, the U.S. and Uruguay are moving backwards, away from this goal.

However, since the beginning of this decade, no region has made significant gains in progress. The Americas and Europe have actually moved backwards.

This increase in year-to-year variability in measles outbreaks – for instance, annual cases in the United States have swung from 55 to 667 to 87 to over 750 in the last decade – can have an outsized impact.

In high-income countries it may trigger unpopular policies, such as mandatory vaccination and school closures, and significant health-system costs, as has been seen in the U.S.

In low- and middle-income countries, a dramatic increase in the number of measles cases can rapidly overwhelm already overburdened health systems. As a result, there’s a higher risk of death associated with each measles case, compared to lower incidence years. The measles outbreak in DRC this year has already resulted in over 1,000 deaths, the same number as the concurrent outbreak of Ebola virus there. 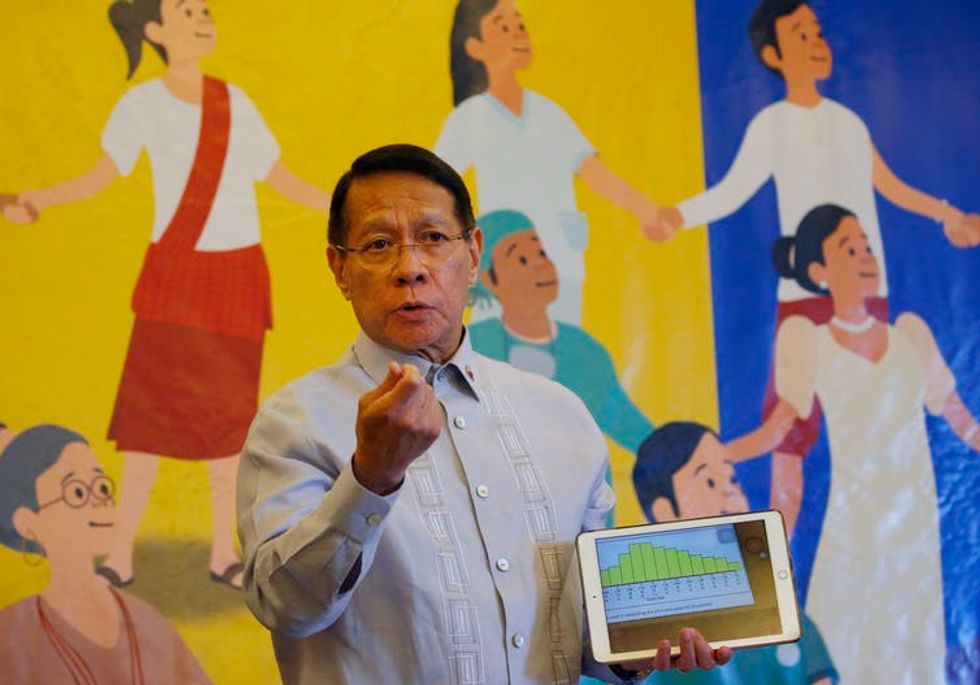 Philippine Health Secretary Francisco Duque III displays a graph showing the decline of the measles outbreak in the country, April 30, 2019.

A recent review of measles mortality illustrated a dramatic decline in the death rate due to measles infection globally. But in countries that are lagging behind on the path to elimination, the chance that a child with measles will die has changed the least. Thus, most children with measles in the world today are still likely to be at high risk of death because they are likely to have poor access to the medical services necessary to treat measles.

Year-to-year variability in measles outbreaks tends to increase as high-burden countries improve their vaccination programs. Outbreaks also become more variable because of backsliding vaccination rates in previously successful countries. The canonical path demonstrated in our research helps us to anticipate when and where these big year-to-year swings are likely to occur. Officials can then target health systems, surveillance and response infrastructure to be more efficient at detecting and minimizing the impact of outbreaks when they happen.