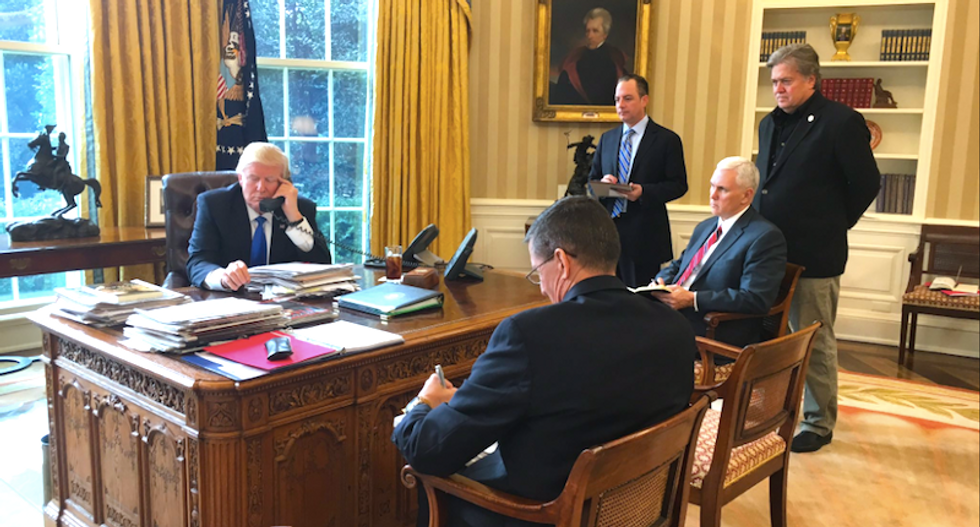 President Donald Trump whined about his disgraced national security adviser after a judge ordered the release of damning new evidence against him.

A federal judge on Thursday ordered the release of recordings that show Michael Flynn discussing sanctions with a Russian ambassador and an individual "connected to" Congress dangling a pardon after his guilty plea for lying to FBI investigators.

Trump raged throughout the following morning about Flynn and the special counsel probe, and he suggested jailing investigators for "treason" -- and then blamed others for his predicament.

"It now seems the General Flynn was under investigation long before was common knowledge," Trump tweeted. "It would have been impossible for me to know this but, if that was the case, and with me being one of two people who would become president, why was I not told so that I could make a change?"

It now seems the General Flynn was under investigation long before was common knowledge. It would have been impossi… https://t.co/Yrigs5s8TE
— Donald J. Trump (@Donald J. Trump)1558103705.0

In fact, numerous government officials and Trump associates warned the president not to hire Flynn for a White House role.

President Barack Obama warned the president-elect against having Flynn serve in his administration during a 90-minute meeting held shortly after the November 2016 election, but Trump administration officials believed Obama was joking about one of his more vocal critics.

Rep. Elijah Cummings sent a letter to Vice President-elect Mike Pence, who led the transition team, in November 2016 warning that Flynn's work for Turkey and a speech he gave in Russia could violate the campaign's code of ethics if he advised Trump on those two foreign nations.

Jared Kushner and Ivanka Trump ignored warnings from Chris Christie and other top officials in November 2016 about Flynn, who the president's son-in-law reportedly instructed to make contact with then-Russian ambassador Sergey Kislyak, and offered the retired general any administration job he wanted.

Flynn himself told then-White House counsel Don McGahn on Jan. 4, 2017, that he was under investigation, and his lawyers discussed the case with transition lawyers two days later.

Acting attorney general Sally Yates then notified McGahn on Jan. 26, 2017, that the Justice Department was concerned Flynn was vulnerable to blackmail from Russia due to his contacts with Kislyak.

Trump kept Flynn on the job until Feb. 14, 2017, after a senior administration official authorized the leak of Yates' warning to the White House about the national security adviser.

The FBI also warned the Trump campaign shortly after he became the Republican presidential nominee in July 2016 that Russia may attempt to spy on or infiltrate his campaign, similar to a briefing also provided to Hillary Clinton's campaign.

Trump associates did not notify FBI officials that Donald Trump Jr. and other high-ranking campaign officials had met with a Russian attorney promising damaging information on Clinton, or other contacts with Russian individuals or WikiLeaks, which had started publishing stolen emails.