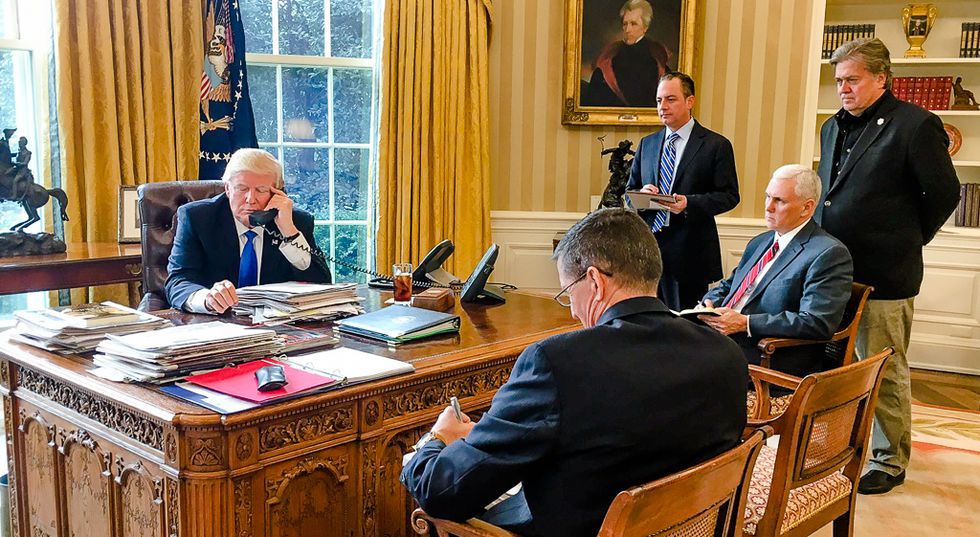 Sally Yates will finally testify Monday on what she knows about possible contacts between Trump campaign officials and Russia -- and there's evidence to suggest she may drop some bombshell revelations.

It seems like every time Yates' name or explosive claims about Russia enter the news cycle, President Donald Trump and his allies lash out.

The veteran Justice Department attorney took over as acting attorney general until Trump's choice, Jeff Sessions, could be confirmed, but she quickly drew the ire of the incoming administration after raising red flags about one of the new president's most trusted advisers.

Jan. 26: Yates warned White House counsel Don McGahn that Mike Flynn, Trump's national security adviser and a finalist for the vice presidency, might have been "compromised" by Russia. She privately told McGahn that Flynn was lying about conversations with Russian ambassador Sergei Kislyak about easing sanctions levied by the outgoing Obama administration against Russia for interfering with the U.S. presidential election.

Jan. 29: Trump signed an executive order elevating Bannon to the National Security Council and while downgrading the chairman of the Joint Chiefs of Staff and the director of national intelligence, a move that most observers considered baffling.

Jan. 30: Yates was fired as acting attorney general in a strongly worded White House statement that argued she had "betrayed" the administration for refusing to defend Trump's controversial travel ban.

Feb. 13: Flynn resigned under pressure after the Washington Post reported Yates had warned the White House counsel about his conversations with Kislyak, and he apologized for misleading Pence and Spicer about those contacts with the Russian ambassador.

Feb. 14: The New York Times reported that intercepted phone calls showed Trump's campaign team and other associates -- including Flynn and former campaign chairman Paul Manafort -- had been in regular contact with senior Russian intelligence officials in the year before the election.

Feb. 15: Priebus asked the FBI's top two officials, director James Comey and deputy director Andrew McCabe, what the agency knew about Russian ties to the Trump campaign. McCabe had told Priebus that the previous day's New York Times report was wrong, and the White House chief of staff asked the law enforcement officials to push back on reports linking Trump associates to Russia. McCabe and Comey declined to publicly comment on possible errors in news reports.

Feb. 15: Spicer personally connected CIA Director Mike Pompeo and Sen. Richard Burr (R-NC), chairman of the Senate Intelligence Committee, with reporters from the Washington Post and The Wall Street Journal to discredit the Times report. The White House press secretary also gave reporters’ phone numbers to Rep. Devin Nunes (R-CA), chairman of the House Intelligence Committee, who offered to make the calls himself but "was in and out of an event."

March 1: Justice Department officials revealed Attorney General Jeff Sessions spoke twice with the Russia ambassador the previous year, which he did not disclose under questioning during his confirmation hearings.

March 2: The Wall Street Journal reported that Sessions used campaign funds to travel to the Republican National Convention in Cleveland, where he met with Kislyak, contradicting Trump administration claims that his conversations with the Russian ambassador were in his role as a U.S. senator.

March 2: Sessions called a hastily organized news conference to announce that he had recused himself from overseeing the probe of Trump-Russia ties.

March 2: Nunes cautioned reporters to "be careful" about contacting Russian embassies to comment on possible contacts between Trump associates and Russia, which he later insisted was only a warning against "engaging in witch hunts."

March 7: Michael Ellis moved over from general counsel for the House committee chaired by Nunes to the White House counsel office, where he worked on national security issues for McGahn.

March 20: Comey confirms during testimony before the House Intelligence Committee that the FBI has been investigating possibly coordination between the Trump campaign and the Kremlin since July.

March 21: Ellis and Ezra Cohen-Watnick, senior director for intelligence at the NSC and a Flynn ally, reportedly shared classified documents with Nunes that showed Trump and his associates were incidentally swept up in foreign surveillance by U.S. intelligence agencies. Nunes revealed those findings the following day in a press conference, which the president claimed had "somewhat" vindicated his accusations against Obama.

March 24: Nunes abruptly canceled House Intelligence Committee hearings hours after the former acting attorney general notified the White House she would discuss her concerns about Flynn. Justice Department officials had told Yates that those conversations about Flynn were privileged, but her lawyer argued that White House officials had waived that confidentiality by repeatedly discussing those communications in public.

March 30: Flynn offered his testimony on possible Trump campaign ties to Russia in exchange for immunity, but the FBI and congressional investigators declined.

April 5: Bannon was removed from the National Security Council, and the CIA director, chairman of the Joint Chiefs of Staff and director of national intelligence reinstated to their previous positions on the council. A senior White House official claims the chief strategist had been placed on the NSC to keep an eye on Flynn, because "we all knew Flynn had issues."

April 6: Nunes announced he would step aside from leading the House investigation of Trump-Russia ties after the House Committee on Ethics revealed he was under investigation for unauthorized leaks of classified information.

May 8: House before Yates was scheduled to testify before Senate investigators, Trump tweeted out suggestions that she had leaked classified information to reporters about her warnings to the White House counsel. Trump also defended the disgraced national security adviser, who he continues to describe as a good man who'd admirably served his country, and blaming the Obama administration for giving him security clearance. However, the former president reportedly warned Trump not to hire Flynn, whom he'd fired as director of the Defense Intelligence Agency.