The Islamic State surrendered its last scrap of territory, in Baghouz, Syria, this past March.

While some argue that celebrations of IS’s demise are premature, there’s no question that the terrorist group left a trail of destruction in its wake.

Many lives were lost, of course. But a looming issue is the group’s legacy of looting.

During IS’s seemingly unstoppable rise, looted artifacts were said to be a significant source of income for the group. Value estimates ranged from a few million to several billion dollars.

One of the issues in media reports about the looting is that no one had a firm grasp of just how much was at stake. The dollar figures amounted to guesswork.

We still don’t know exactly what’s missing. But no one had identified the value, using empirical data and systematic calculations, of the artifacts that were known to exist in these archaeological sites. Until now.

With two Near Eastern archaeologists and two art market researchers on our team, we recently published a paper in the International Journal of Cultural Property that offers the first attempt to quantify the market value of artifacts at the level of a site.

The excavated objects’ total value was larger than we had expected. We found that just a small portion of a site can yield thousands of objects, adding up to millions of dollars.

An archaeological gold mine

For the study, we examined two sites from different time periods that housed two different types of settlements. The first, Dura Europos, was a Roman garrison town on the Euphrates with a multi-ethnic population. Four years ago, when satellite images revealed that Syria’s archaeological sites were being looted on a massive scale, the shots from Dura Europos showed a Swiss-cheese landscape of pits.

The second town we studied, Tell Bi’a, in northern Syria, was a major Bronze Age capital in the second millennium B.C.

In the early decades of the 20th century, archaeologists excavated roughly 40% of Dura Europos. About 10% of Tell Bi'a was studied in the 1980s and 1990s. Records at these two sites list over 13,000 objects, excluding coins.

Using a machine learning model, we compared archaeological records and sales records of over 40,000 antiquities from auction houses, galleries and dealers to predict what these objects would sell for. The goal was to match objects observed for sale on the art market with similar objects documented in excavation records.

Based on our model, the total estimated value of all artifacts, not including coins, excavated from Dura Europos to date is US$18 million. At Tell Bi’a, the estimate is $4 million. This range is partly explained by the different sizes of the two cities and the area that was excavated. It’s also explained by market interest: Greek and Roman artifacts, which comprise the large majority of objects found at Dura Europos, fetch higher prices at auction than Bronze Age items, which make up the majority of artifacts at Tell Bi’a.

It’s important to keep in mind that these dollar figures represent just slices of two sites. The most comprehensive database of Syrian archaeological sites, assembled by archaeologist Jesse Casana and collaborators at Dartmouth College, has identified roughly 15,000 major sites in the country. Data examined by Casana’s team suggest that 3,000 of those sites experienced some looting from the start of the Syrian Civil War in April 2011 to mid-2015. 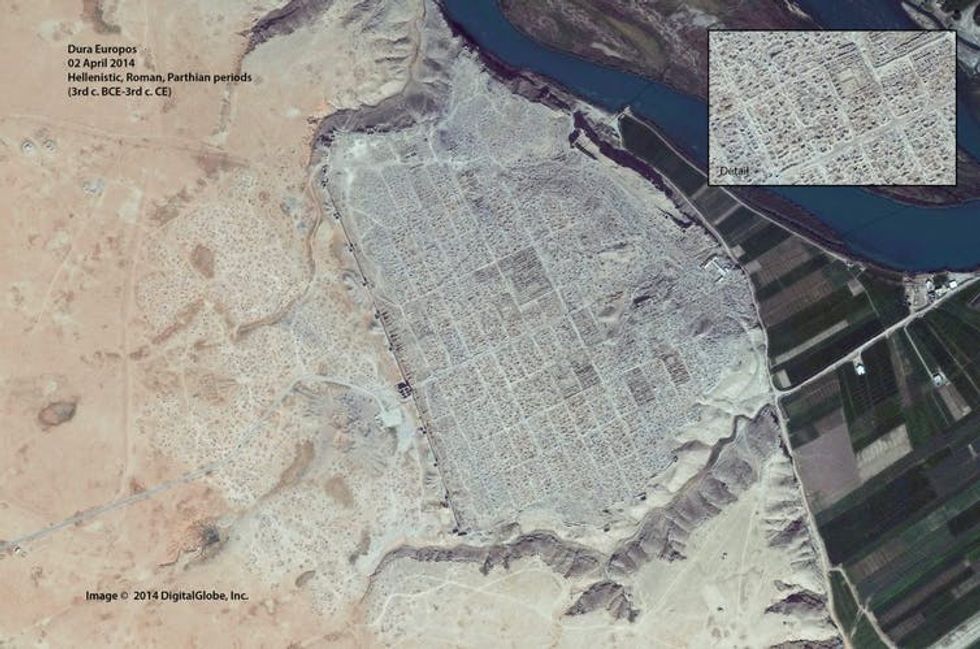 A 2014 satellite image of Dura Europos published by the American Schools of Oriental Research. The detail in the top-right shows looting holes.

Not every site has the artifactual density or richness of Dura Europos. But if a small portion of a single site like Tell Bi’a is capable of generating $4 million in sales – and there are 15,000 major sites – it doesn’t take much imagination to see just how much of an archaeological gold mine the country is.

Again, these dollar figures do not tell us what IS – or any other looters – actually pocketed. Our numbers project the total estimated value of recorded artifacts excavated at a particular site to date. In other words, over the past four years, IS had a treasure trove of artifacts at their disposal that they were able to pawn on a whim.

We may never know the full extent of the loss.

What should we do with these estimates?

First, any policy that hopes to tackle archaeological looting needs reliable market estimates that highlight the scope and scale of the issue. Our findings get us closer to a point where everyone’s on the same page. 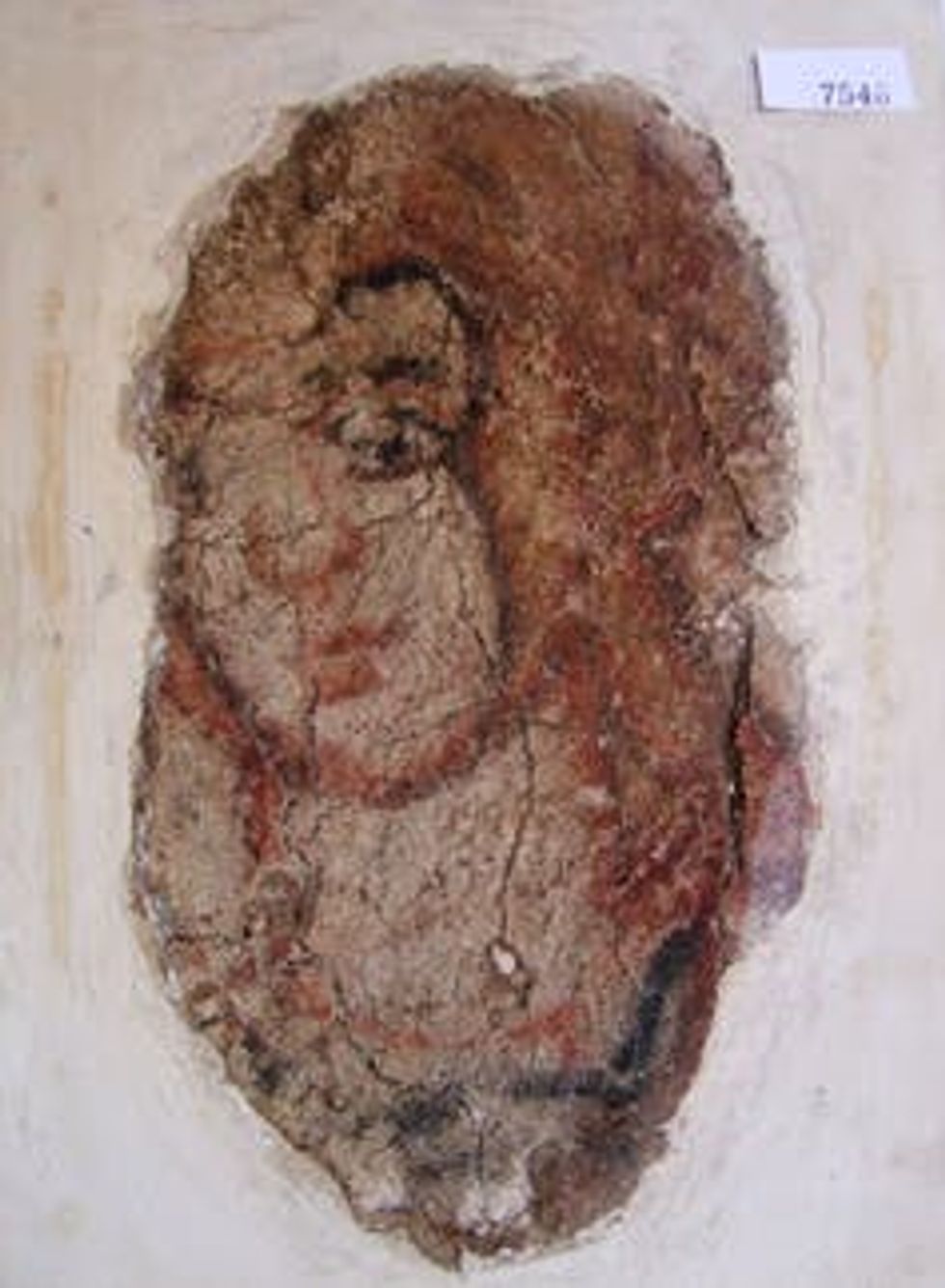 A fragment of a 2nd-century mural discovered in 1992 in the ancient city of Dura Europos. This particular piece was brought to Damascus for safe keeping during the Civil War, but thousands of other artifacts were left vulnerable to looting.

Second, our data show that small objects account for the majority of market share. At Dura Europos, 50% of the total market value was generated by objects under 13 cm long, and at Tell Bi'a by objects under 7 cm long.

These small treasures can pack a big punch on the market. We’re not the first to suggest that such finds have outsize importance in the antiquities trade, and our data indicate that policies to address the black market – at least for Syrian antiquities – should focus on objects that can fit in looters’ pockets.

Our estimates also hint at possible features of the supply chain. Pairing our observations of market sales with existing evidence of farm gate prices – the price paid to looters at the source – we found that looters are paid just a small fraction of what objects would earn at their final destination. While evidence of farm gate prices is limited, it indicates that much of the final price may be going to middlemen or dealers.

Beyond the Islamic State

However this isn’t a story solely about IS. We know that multiple groups participated in archaeological looting during the Syrian war, including the Syrian government’s own army. IS did not invent looting; the group tapped into an existing looting infrastructure and intensified its scale and productivity. Archaeological looting is a global problem, and Syria will continue to be of interest to hobby diggers, renegade excavators and thieves.

Of course, the legacy of Syrian wartime looting can’t just be measured in dollars. It’s a loss of culture and of historical knowledge. Archaeologists use artifacts to connect people, ideas and customs and track historical change. When an item goes missing, the ability to braid together such a rich history becomes that much harder.

Calculating the market value of an entire ancient city might be helpful for policymakers and scholars. But it doesn’t change what Syrians and Iraqis already know all too well: You can’t put a price on history.