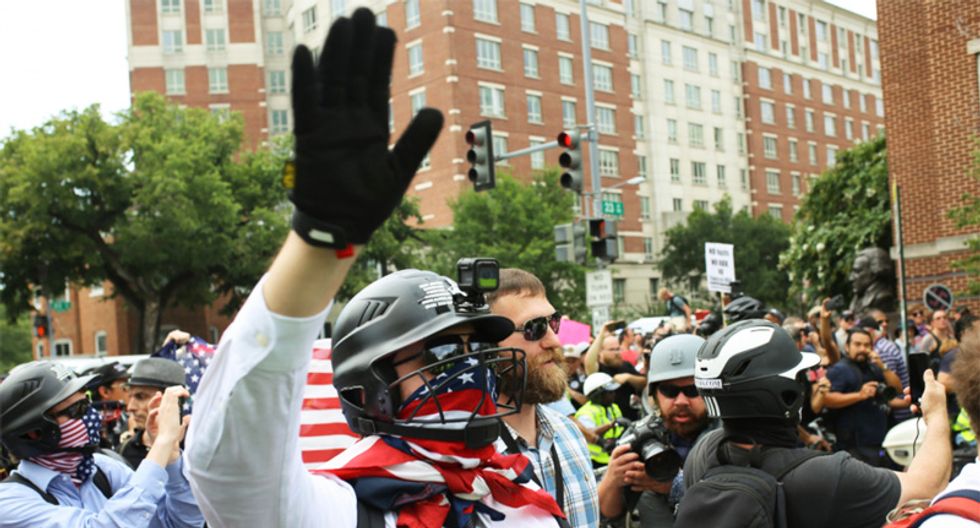 White nationalists who have reached back into medieval history to justify their bigotry are finding themselves confronted by scholars who state they are reading it all wrong, reports the New York Times.

In a deep dive into history and a culture appropriated by young white men who feel they have a champion in Donald Trump since he was elected president in 2016, the Times reports that historians are pushing back at "a rising tide of far-right extremists" who have taken to the streets in protests and attacks.

"Since the 2016 presidential election, scholars have hotly debated the best way to counter the 'weaponization' of the Middle Ages by a rising tide of far-right extremists, whether it’s white nationalist marchers in Charlottesville, Va., displaying medieval symbols or the white terrorist who murdered 50 people at two mosques in Christchurch, New Zealand, using weapons inscribed with references to the Crusades," the report states.

Noting the use of "shields evoking the Knights Templar or holding banners with Anglo-Saxon runes" during the Charlottesville protests, one scholar said the nationalists are misguided.

“Medieval Studies always wants to be relevant,” explained Ruth Mazo Karras, a historian at Trinity College, Dublin, and president of the Medieval Academy of America. “But now we’ve become relevant in the wrong way.”

"A week after Charlottesville, the Medieval Academy and 28 other scholarly groups released a statement condemning the 'fantasy of a pure, white Europe that bears no relationship to reality'," the Times reports. "Some medievalists overhauled their teaching, discussing misappropriations of history along with the history itself. Suddenly, professors began worrying about how to respond to students who might bring up white nationalist themes in class — or who might assume that medievalists themselves are white supremacists."

"In Europe, academic study of the Middle Ages developed in tandem with a romantic nationalism that rooted the nation-state in an idealized past populated by Anglo-Saxons and other supposedly distinct 'races,'" the report continues. "In the United States, universities, cultural institutions and wealthy elites drew on Gothic architecture, heraldry and other medieval trappings to ground American identity in a noble (and implicitly white) European history. So did Southern slaveholders and the Ku Klux Klan."

According to the report, scholars are also at each other's throats over how the history is taught, with one scholar, Cord Whitaker, an assistant professor of English at Wellesley College stating, “It’s about asserting the racial and political innocence of the Middle Ages. For medievalists to try to protect the field from engagement with race is ultimately to try to withdraw from the world.”