Eric and Don Jr returned to the US without paying their Irish bar tab: report 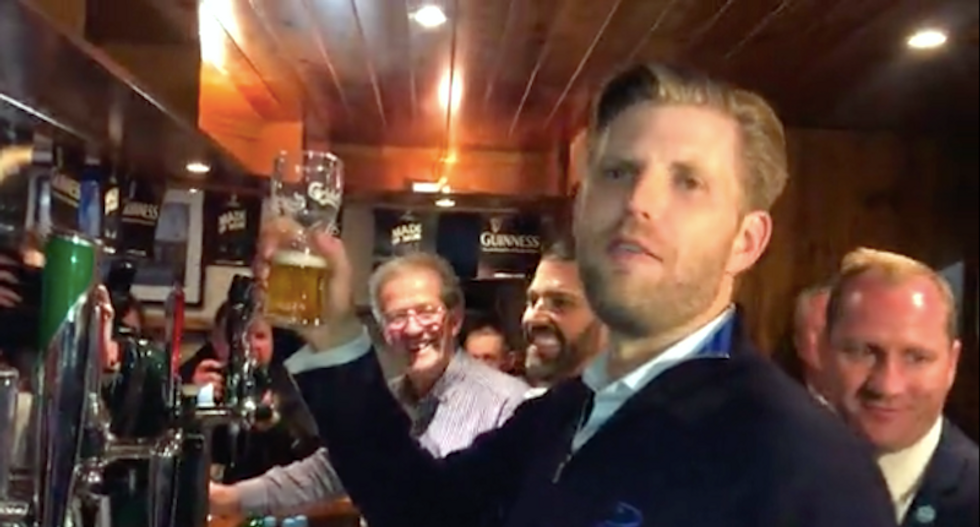 According to a report from the Irish Times, Eric and Don Trump Jr. have yet to pay their bar tab from an Irish pub crawl.

As noted by the Daily Beast, the Times reports the sons of President Donald Trump offered free rounds during the bar carousing but failed to pay before leaving, according to one pub owner.

"Caroline Kennedy, the owner of Igoe bar in Doonbeg, where Trump owns a golf course, told the Irish Times that the president’s sons were “lovely and down to earth” but did not have any cash on them when they left her establishment," the report states.

“I said, ‘Come on lads you have to come in and pull a drink’ so they did,” Kennedy said. “They thanked everyone for their support and for coming out to meet them and said there was a drink for everyone in the house and it was their small gesture.”

According to the owner, she expects to be paid sometime.

“I don’t think we’ve to worry about getting paid for that,” she remarked. “I don’t think they carry cash. We were told it’d be all sorted later so there’s no problem.”

(UPDATED) : The Igoe bar reporeted they have finally been paid by the Trump's in a Facebook post -- see below: