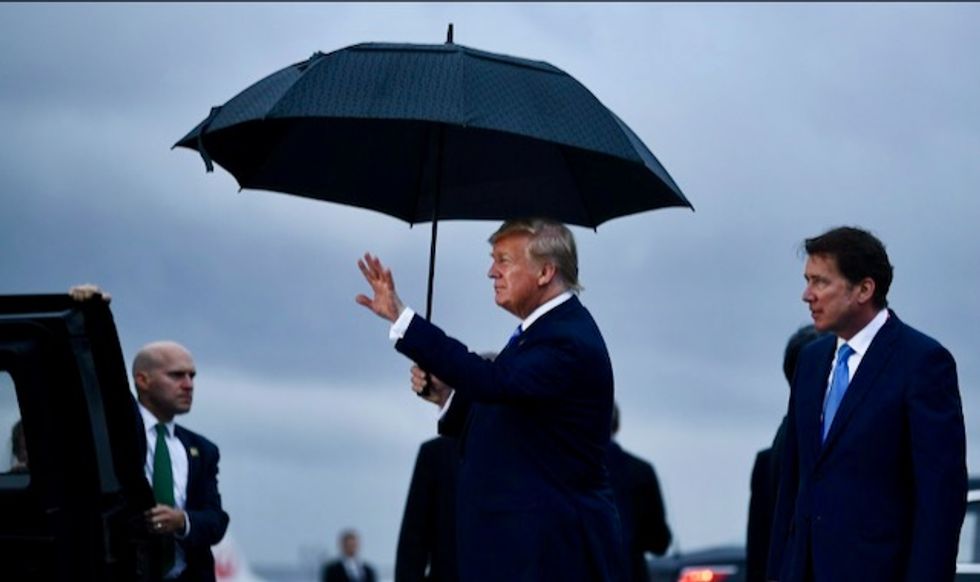 US President Donald Trump set the tone Thursday for what promises to be a stormy G20 summit by lashing out at friends and foes alike over trade tariffs and foreign policy.

The long-running US-China trade war looked set to dominate the two-day meeting of world leaders in Osaka from Friday but clashes also loomed over climate and hotspots including North Korea and Iran.

On board Air Force One en route to Japan, Trump fired off a characteristically bullish tweet, chiding long-standing ally India for "unacceptable" tariffs on American goods.

"India, for years having put very high Tariffs against the United States, just recently increased the Tariffs even further. This is unacceptable and the Tariffs must be withdrawn," tweeted Trump.

AFP / Kazuhiro NOGI Chinese President Xi Jinping touched down in Osaka, where long-running trade war with US is poised to dominate the agenda at the G20

The US president had earlier taken aim at China, saying Beijing wanted to do a deal because the world's number-two economy was "going down the tubes".

Furious at what he sees as an unfair advantage in the trading system, Trump has already hit Beijing with $200 billion in levies on Chinese imports and appeared to threaten more.

"You have another $325 billion that I haven't taxed yet -- it's ripe for taxing, for putting tariffs on," he said in an interview with Fox Business Network.

Chinese President Xi Jinping touched down in Osaka several hours before Trump in driving rain as a potential typhoon edges towards Japan. The two leaders are expected to meet Saturday.

Trump touched down just before 7pm local time (1000 GMT), the president clutching an umbrella and walking gingerly down the plane steps.

AFP / Vincent LEFAI Map showing the G20 members, plus a comparison of their respective GDPs

Most experts say a formal deal is unlikely at the summit due to a lack of time to prepare the complex issues involved and believe a ceasefire and commitment to keep talking is the most likely outcome.

"I would be very, very surprised if they could work out all of these complicated disagreements in the next few days," said David Dollar, a China expert at the Washington-based Brookings Institution.

"I think if Xi Jinping and President Trump have some negotiations... that will have a very positive impact on the world economy," Naoyuki Yoshino, head of the Asian Development Bank Institute, told AFP.

While US-China trade is likely to dominate the meeting, world leaders are also facing a perfect storm of geopolitical hotspots from Iran to North Korea and Venezuela.

Tensions with Tehran are at fever pitch after Trump pulled back from military action at the last minute in response to the downing of an unmanned US drone.

Before leaving for the G20, Trump said he did not seek conflict with the long-time US foe but warned it "wouldn't last very long" if war did break out.

Iran will be one of several topics when Trump meets his Russian counterpart Vladimir Putin on the sidelines of the meeting, along with arms control, the crisis in Venezuela, and Ukraine.

"I'll have a very good conversation with him," Trump told reporters at the White House. "What I say to him is none of your business."

Hosts Japan have desperately tried to steer attention away from the Trump show and on to the formal aspects of their G20 agenda, including the challenges posed by ageing populations and climate change.

World leaders flew into Osaka in the driving rain, with concerns over the health of German Chancellor Angela Merkel who suffered a second shaking attack earlier Thursday.

"Confrontation tends to attract attention... but Japan, as the chair, hopes to find common ground rather than differences in opinions," said Prime Minister Shinzo Abe as he left Tokyo for Osaka.

But tensions over the final statement on climate change are likely to burst into the open, with a German source saying it was "particularly difficult this year" to reach agreement.

EU Council President Donald Tusk summed up the pre-meeting mood by predicting "a difficult summit" in talks with Abe, according to a Japanese government source.

And Trump appeared in no mood for compromise, hitting out at traditional allies one-by-one, even his hosts.

He described Vietnam as the "single worst abuser" on trade, lashed Germany as "delinquent" on funding contributions to NATO, and mocked Japan, which has been under a US military umbrella since World War II.

"If Japan is attacked, we will fight World War III. We will go in and protect them with our lives and with our treasure," he said.

"But if we're attacked, Japan doesn't have to help us. They can watch it on a Sony television."