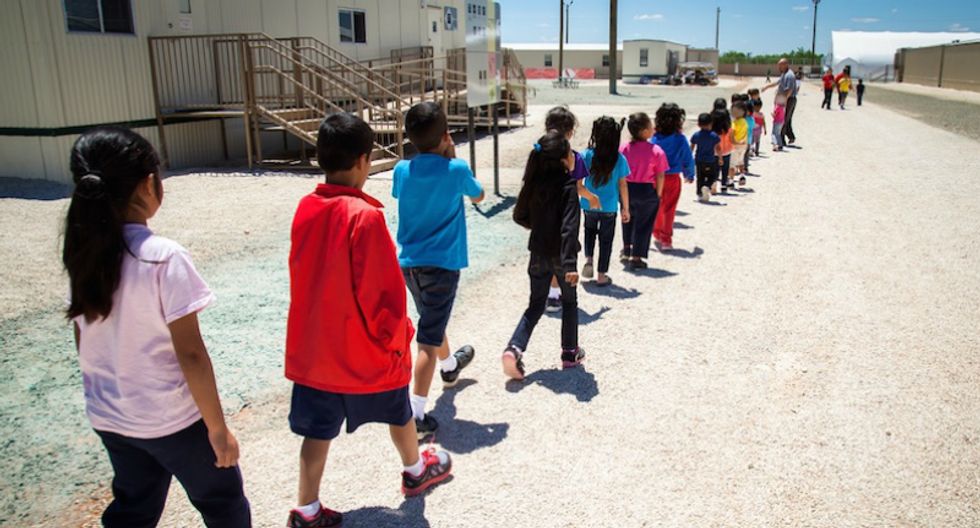 Children walk to classrooms at the Dilley detention center in 2015. Image via Charles Reed/DVIDS.

As Republican lawmakers furiously deny that President Donald Trump is holding migrant families in "concentration camps" along the border, historians have been charting the alarming parallels with Nazi Germany.

"One of the enduring myths of the Nazi era is that average Germans didn't know what was happening to persecuted groups including the Jews," Richardson-Little tweeted. "Everyone knew about the round ups and the deportations - they were impossible to miss in daily life."

Many Germans saw those concentration camps as a "sensible policy," rather than state-sponsored terrorization, intended to deal with Jewish immigrants and social and political "deviants," the historian wrote.

Nazi propaganda mapped out a worldwide Jewish conspiracy that posed an existential threat to the racial purity of the "Aryan" people, and also linked Jews to everyday crimes -- such as illegal drugs and narcotics.

That proved effective for those who weren't persuaded by anti-Semitic conspiracy theories about worldwide Jewish domination, Richardson-Little wrote.

Nazis wanted Germans to fear the camps, the historian wrote, while also reassuring the public that conditions there were humane.

That disconnect also provided an alibi after war, when Germans insisted they did not know what was going on at the concentration camps.

"They merely supported a state policy to take deviants away from society to be housed in humane facilities where they could do no harm," Richardson-Little wrote.

But that simply isn't true, he argued.

"There was excessive evidence of the horrors of what was happening in the camps and the violence and death inherent to the Nazi project," Richardson-Little wrote. "But the Third Reich provided its citizens a veneer of respectability that they could cling to as a shield to avoid confronting this reality."