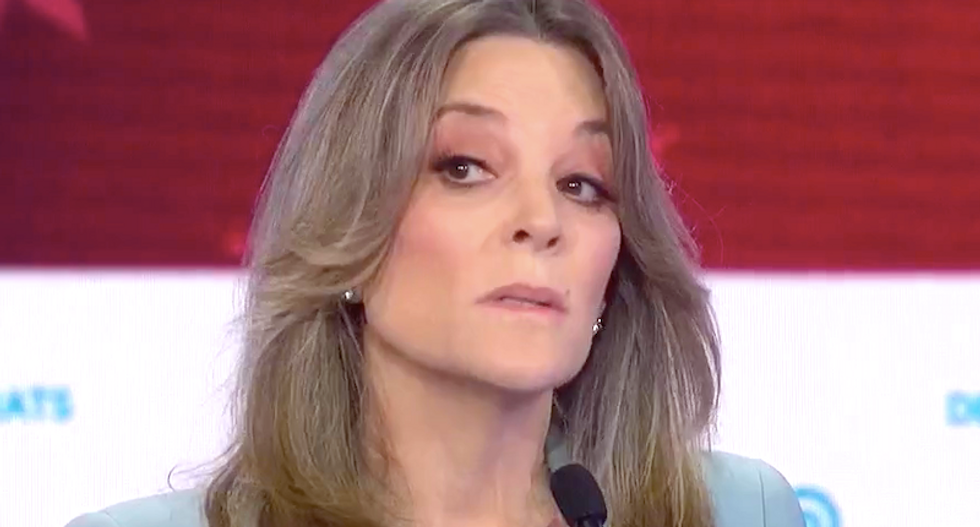 Marianne Williamson -- a self-help speaker and bestselling author Gwyneth Paltrow has praised as a “spiritual legend” -- mystified audiences with her oddball performance at the second round of the Democratic presidential debates.

Many viewers had never seen the long-shot candidate in action, and they were largely baffled by what they saw -- when Williamson even got a chance to speak.

We're almost 30 minutes through the debate and has Marianne Williamson spoken once yet?
— Allan Smith (@Allan Smith)1561685044.0

Marianne Williamson is charging up her aura. When the moderators finally let her speak what she says will be very… https://t.co/6FnlYHUoN6
— Gravel Institute (@Gravel Institute)1561684860.0

soft glamour? valley of the dolls like voice? ranting about vague chemicals? Do I stan Marianne Williamson for President?
— Gabby Noone (@Gabby Noone)1561685395.0

Marianne Williamson is the Ben Carson of the Democratic primary, only we won't actually put her in the cabinet.
— Matthew Miller (@Matthew Miller)1561685726.0

Marianne Williamson has the energy of a character with a two episode arc on Frasier.
— Sawyer (@Sawyer)1561687232.0

6 months ago Stevie Nicks got sick of our shit summoned a golem put it in a periwinkle velvet blazer and now we hav… https://t.co/umOcpZ5LmX
— Anthony Oliveira (@Anthony Oliveira)1561691926.0