Lindsey Graham shoves Trump toward war: 'Anyone would believe we're one step closer' 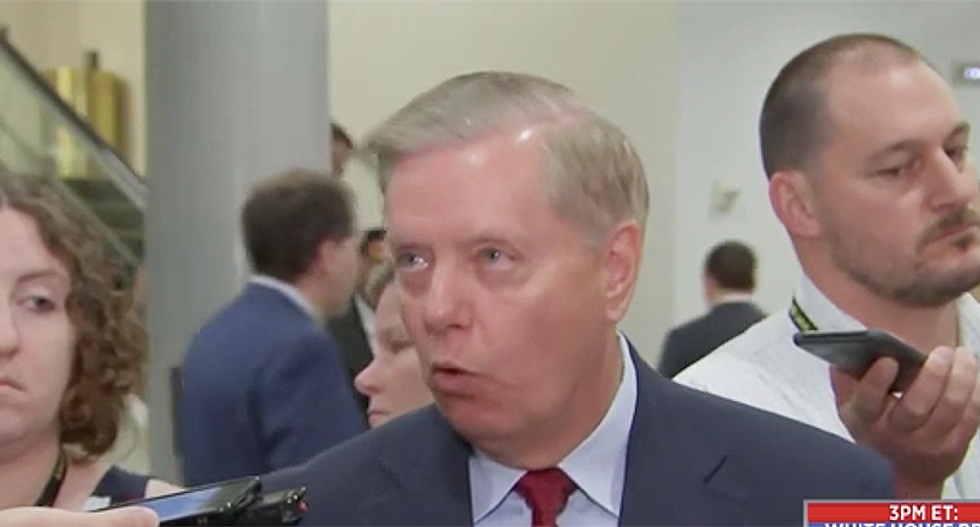 President Donald Trump seemed to try and deescalate the situation between Iran and the U.S. in wake of the former shooting down an American drone. But Sen. Lindsey Graham (R-SC) seems to be shoving the president toward war.

"I think anybody would believe that we’re one step closer" [to war], Graham told the press in the hallways of Congress Thursday. "They shot down an American asset, well within international waters -- trying to assess the situation. What are you supposed to do?"

He said that Ronald Reagan "took a lot" before he acted and Trump is in the same position now.

"This president has taken a lot from Iran. He was right to get out of a bad deal," Graham continued. "He was right to put sanctions on their disruptive behavior throughout the world. He’d like a better deal. To me, it is clear that the Iranians are trying to break us between our allies, they’re trying to create chaos to oil prices, and you can’t legitimize this way of negotiating. If we do it with Iran the next thing that will happen is North Korea will explode a bomb, shoot off a missile thinking that is the best way to get America back at the table."

Wednesday, the White House spent the day trying to reassure Capitol Hill that they were not going to go to war with Iran and tried to tamp down fears from officials. That was before the drone was shot down.

"All I can tell you — if you’re not willing to stand up to aggression you’re going to get hurt," Graham told the press, but he may have well been speaking to Trump himself. "So ignoring al Qaeda in Afghanistan was not a very good strategy. This is not an endless war. This is a provocative regime that dismembered the Middle East, that shoots its own people down in the streets, threatens the existence of the state of Israel. This is an enemy of mankind."

Graham then took it to the next level.

"If you’re not willing to take this enemy on, you’ll regret it because you’ll put all the pressure on Israel," he seemed to challenge the president. "Here’s what I believe about Donald Trump: He is a deal maker and trying to avoid conflict but this is truly a defining moment for him. When Obama said to Assad you better not use chemical weapons, Assad did, the rest is history. Trump has told the Iranians, you cannot disrupt navigation of the seas. You can’t attack our interests, our allies."

Capitol Hill reporter Kelly O'Donnell explained that Graham had a level of intensity and fire when she heard him speak in person and he was clearly putting pressure on Trump to act. He compared it to when President Barack Obama drew a red line with Syria but then didn't act once it was crossed.

House and Senate leaders are headed to the White House Thursday to meet with the president about Iran.