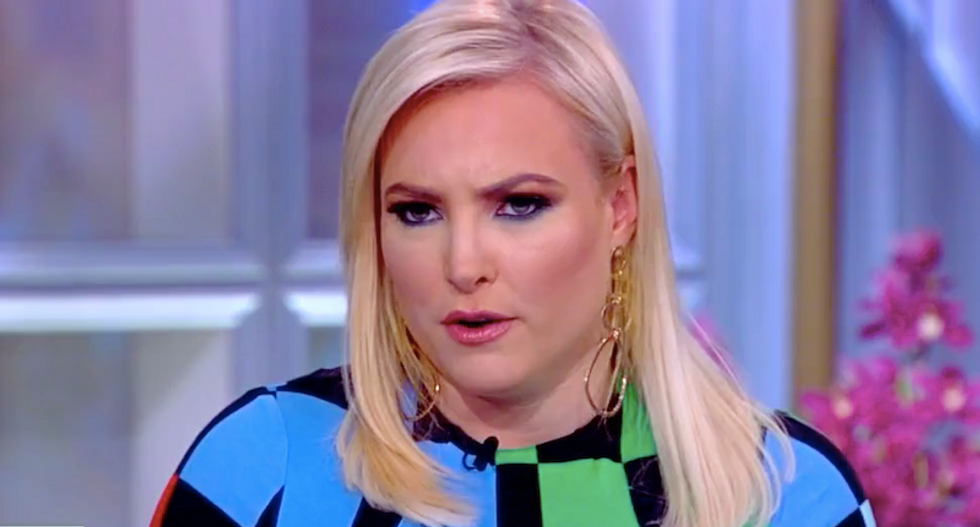 Meghan McCain ripped President Donald Trump for inviting foreign assistance in his 2020 re-election bid -- even as she accepted his misleading framing about the Mueller report.

"The View" co-host said anyone involved in a political campaign should know it's illegal to accept foreign aid, and she agreed with fellow Republican Lindsey Graham that the president shouldn't have signaled his willingness to accept that type of assistance.

"If someone from any country, Norway or whatever, came to me and said, hey Meghan, I have information on X opponent or X person, anyone, you should immediately go to the FBI," she said. "It's very basic crap here. By the way, I think that when you open up this Pandora's box in the way he has, it's a very, very dangerous precedent and it is illegal."

"I think he feels emboldened because the Mueller report came out and said 'no collusion,'" she added.

Special counsel Robert Mueller did not establish enough evidence to charge anyone from the Trump campaign as part of a conspiracy to rig the election, but explicitly explained that investigators did not evaluate whether there was collusion -- which McCain has repeatedly reminded her panelists isn't a federal crime.

"Here's the problem," said co-host Ana Navarro. "The Mueller report clearly says that Russia interfered in the election, Russia meddled and tried to give information through the Trump Tower meeting. At the same time Mueller did not charge Trump, they are interpreting this -- including people like Rudy Giuliani, who you'll remember just a week after the report came out said he was going to Ukraine to find negative intelligence on Joe Biden."

"They are interpreting this as a blank slate, clean bill, go do it, get out of jail card, there's no problem, you can do it," she added. "That's why I think there needs to be absolute clarification bipartisan. It shouldn't just be Democrats saying it's illegal. It should be Republicans."

"He's saying he would do it but it hasn't happened yet," she said. "Maybe that's the logic."