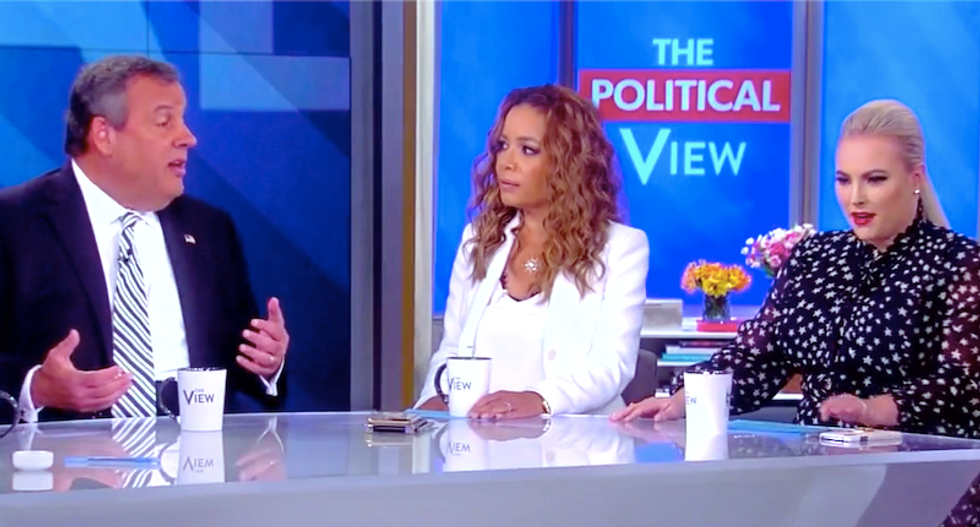 Meghan McCain jumped in and tried to save her ABC News colleague Chris Christie after her co-hosts jumped all over his unyielding defense of President Donald Trump.

The former Republican New Jersey governor appeared Friday on "The View" to sort out the winners and losers from the first Democratic presidential debates, and Christie explained that he supported Trump's policies despite his personal failings.

"I've said all along that Donald Trump's policies, in general, are more in line with my philosophies than Hillary Clinton's (were)," he said.

Fellow conservative Ana Navarro challenged him to defend his support for Trump's lawlessness.

"I'm for tax cuts," he said. "I'm for deregulation, I'm for balancing the federal judiciary after eight years of Obama."

"I will tell you this," Christie added. "I'm not for pie-in-the-sky ideas like the new green deal (sic), which is not going to happen -- it's pie-in-the-sky, too expensive."

"But he doesn't have any policies," said co-host Sunny Hostin.

"He doesn't seem to believe in science," Hostin added.

That's when McCain jumped in to complain about her job.

"Now you know what my life is like every day on this show, man," McCain said. "Getting screamed at just for being a Republican."