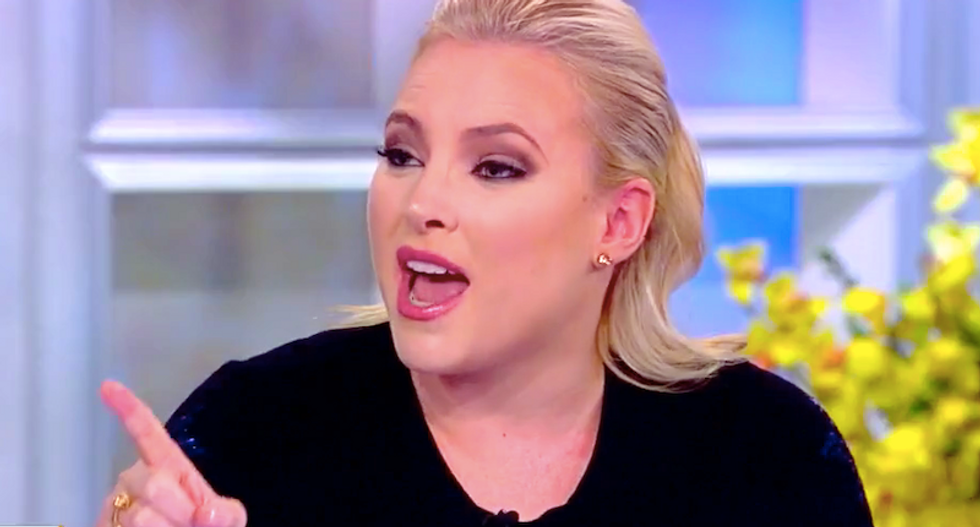 Meghan McCain slammed Iran for its treatment of LGBT people, and she lashed out when Whoopi Goldberg reminded her of the Republican Party's less-than-stellar record on equal rights.

"The View" co-host condemned Iran's harshly oppressive treatment of women and LGBT people, as its leaders engage in an escalating war of words with President Donald Trump.

"When you are a leader of a country that throws gay people off of roofs for being gay, and stone women in the street for wearing tank tops, how dare you judge our country," McCain said.

Goldberg stepped in to say the U.S. didn't have a spotless history in that regard.

"Let us not forget what's happening to gay people in this country," she said.

"But they're not killed," she said. "It's not illegal to be gay here."

"Not yet, not yet," she said. "You think this is not, you know, something that's being thrown around?"

McCain said she'd never heard of that topic being discussed, and Goldberg urged her to pay closer attention.

"You should read more stuff in the newspapers and see what people are doing," Goldberg said, and co-host Sunny Hostin pointed to the military's ban on transgender troops.

Goldberg then steered the conversation back on topic to the escalating tensions between the Trump administration and Iran, but McCain couldn't let it go.

"Can I speak?" McCain said, and Goldberg wrapped up her point. "I get exhausted when the hyperbole becomes, in the media in general, we're no better than Iran. I know what you're saying about trans people in the military."

"I'm the person that invited the trans soldiers that I met when I was accepting the Harvey Milk Award here to come on and talk about it," she continued. "But what I will say is, there is a huge difference between if you are gay in Iran, you will be thrown off the side of a building and killed, and if you don't think there is a difference between Iran and the United States of America, I don't know if I should -- we shouldn't be having a conversation. It's going to make my head explode."