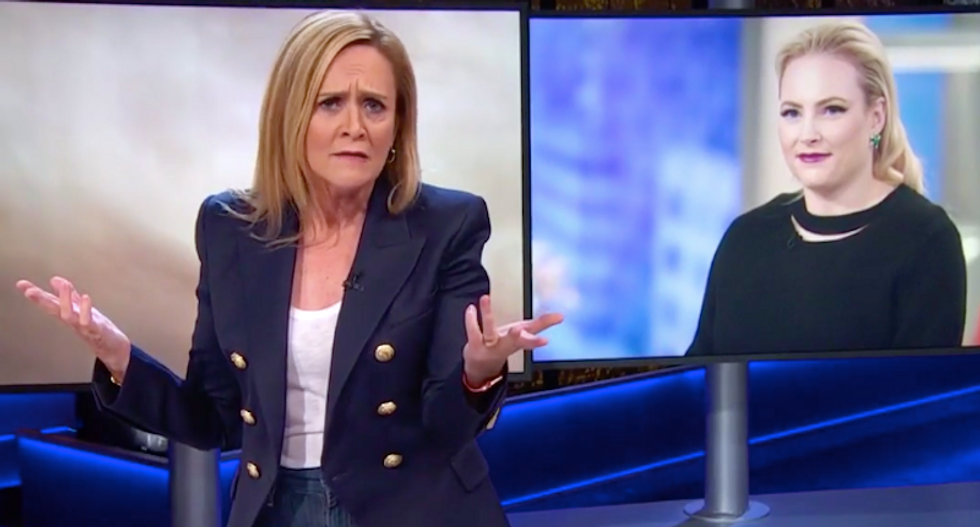 The "Full Frontal" host pointed out that author and columnist E. Jean Carroll was the 22nd woman to lodge sexual misconduct allegations against the president, whose 2016 campaign was nearly derailed when video surfaced of him bragging about getting away with sexual assault.

“If you missed this story, that’s not surprising,” Bee said. “Days later, the accusations are being discussed but it’s still being treated as a small story. It’s not getting the wall-to-wall coverage that, say, Fire and Fury did, which is ridiculous, because Trump’s response alone should be headline news for days.”

Trump claimed Carroll wasn't his "type" -- which Bee and many other commentators, primarily women, have condemned.

“Don’t say you have a rape type," Bee said. "You aren’t her type either, which is the whole f*cking problem. Every woman has heard a guy say some version of ‘you’re not hot enough for me to rape,’ and that is how we know he’s probably a rapist.”

Bee said what little coverage the story has garnered has left something to be desired, and she bashed "The View" co-host McCain.

“Noted TV dum-dum Meghan McCain took a much-needed break from being Judaism’s self-appointed spokesperson to say that maybe Carroll is lying,” she said.

McCain complained that she would be "raked over the coals," borrowing language co-host Joy Behar had used to explain why Carroll might have been reluctant to accuse Trump, for doubting her claims about the rape more than 20 years ago.

“Wow, Meghan McCain’s take is so bad, Joy Behar literally had to wear sunglasses to hold back her eye lasers,” Bee said. “It’s not people who defend accused rapists who put something on the line, it’s the women who decide to speak up who, as Carroll puts it, receive death threats, are driven from their home, dismissed and dragged through the mud, only to see Trump turn it around, deny, threaten and attack them, which is exactly what he did again.”

“I’m sorry that the media is tired of talking about how the president did sexual assault a bunch but imagine how tired women are of having a sexual assaulter as president,” Bee added. “Of course it’s impossible to hear accusation after accusation without getting accustomed to it. That’s no one’s fault and I’m not singling anyone out, but when you let him off with softball questions about where he’s going to build his library without once mentioning his many accusers, you are dropping the ball, Chuck Todd. No one should ever sit down with President Predator without asking about these 22 women.”

“It matters, it will never stop mattering,” she said. “You wouldn’t interview Jeffrey Dahmer and only ask him about spice blends. If you’re not going to hold Trump accountable, you are not a journalist. Go do Sunday morning segments about f*cking lasagna. Otherwise, do your job, please.”