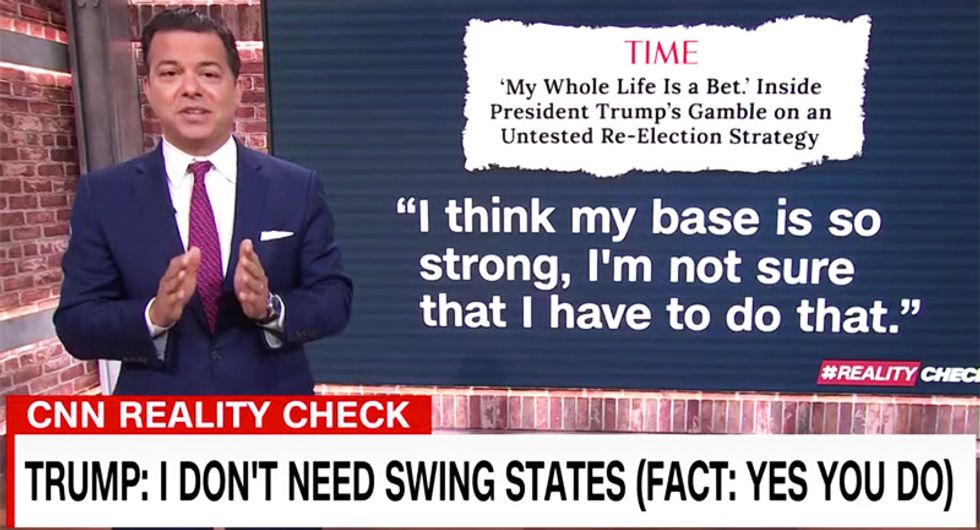 During his "Reality Check" segment on CNN's "New Day" analyst John Avlon took a hard look at President Donald Trump's boast in Orlando that he could be re-elected with only the support of his rabid base -- and then disabused the president of the notion.

At his rally on Tuesday night, Trump claimed he didn't need additional voters to remain in the Oval Office after the 2020 election, telling his adoring fans, "I think my base is so strong, I'm not sure I have to do that."

According to Avlon, the president is bluffing.

"Donald Trump doesn't need no stinking swing voters to get re-elected," Avlon smirked as he began. "He said 'I think my base is so strong, I don't think I have to do that,' and this is play to the base on steroids but it fits the way he's governed."

"Trump is massively popular within the Republican Party," the CNN analyst continued. "But he's the only president in the history of Gallup polling never to be above 50 percent approval rating in his presidency and no president has been re-elected with a net negative rating. He can't ignore swing voters and be re-elected and that's because the base isn't big enough to win on its own."

"Only 30 percent of Americans identify as Republican, Democrats 31 percent while independents are at 38 percent, " he elaborated. ".Donald Trump won the independent vote over Hillary Clinton 46 percent to 42 percent. In part that may be because Trump was seen as less conservative. Democrats won independent voters big-time in the 2018 midterms by a 12-point margin and that's three times what Trump won them by before -- and that trend is not Trump's friend."