Bill Barr and the Justice Department are nothing more than a joke: Conservative columnist 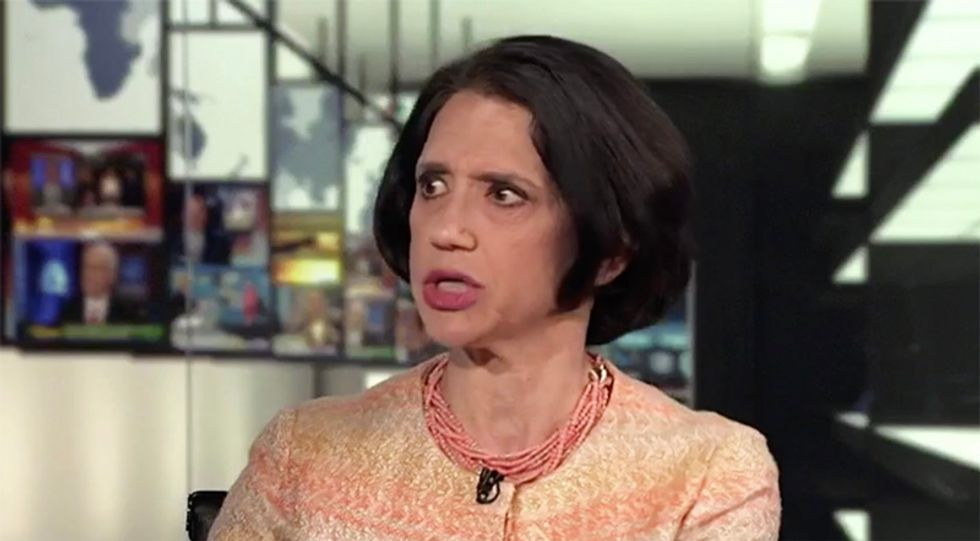 Jennifer Rubin on AM Joy -- screenshot

Conservative Washington Post columnist Jennifer Rubin thinks that the Justice Department and Attorney General Bill Barr are a joke, according to her latest piece.

Late last week, the Supreme Court told President Donald Trump's administration they couldn't try to scare people with the census citizenship question. Since then it has been a court battle and public relations nightmare for the Department of Justice. DOJ lawyers had an embarrassing moment when speaking to U.S. District Judge George Hazel when the president seemed to be tweeting different things than lawyers were arguing in court.

To make matters worse, the hard drives found from a deceased GOP operative revealed the sinister purpose of the census question was about suppression, fear and giving Republicans an edge in redistricting.

"The administration, you see, just hasn't figured out what that non-pretextual excuse is," Rubin wrote Sunday. "Its position now raises several questions, including: 1) Did the Justice Department lie to the courts to get an expedited Supreme Court hearing by claiming the issue had to be resolved by June 30 and 2) Did the president give the game away when he told reporters the question was needed for reapportionment?"

"There's a term for trying to create a structural political advantage for 'Republicans and non-Hispanic whites,' and that term is 'white power,'" Ian Bassin, executive director of the nonpartisan nonprofit Protect Democracy, told Rubin. "And we now know that's been the purpose all along for adding a citizenship question to the census."

Trump is trying to get away with any investigations by stonewalling hearings, refusing to comply with subpoenas and declaring "executive privilege." Now he's trying a new tactic: issuing an executive order because he thinks it will make the legal problems disappear. Rubin explained it in one word: "Wrong."

"The Supreme Court disallowed the question for now and sent it back for the 'real reason' for including the question," Rubin explained.

As was seen before, any of Trump's executive orders that end up in court and are stopped before hashing them out in court. Rulings on the order would then climb the ladder of the judicial system until it ends up back at the Supreme Court where it would be shut down again. All of that would delay the printing and mail of the census, which is constitutionally mandated to fall on a specific timeline. Trump has zero room to move in the corner he's boxed himself into.

As Rubin points out, the Republican Party has hurt themselves with the failed attempt to rig the system.

"Moreover, we know from evidence belatedly uncovered that the real reason was to produce a census that favored white voters and hence the Republican Party (thereby acknowledging that the party's political survival is entirely dependent on artificially inflating the white share of the electorate)," Rubin wrote. "The government actually tried to halt discovery in a Maryland lawsuit over the census question while it comes up with a new explanation, a cheeky move slapped down by U.S. District Judge George J. Hazel. They want to keep litigating the real reason for the citizenship question? Fine, let's have at it."

She cited Harvard Professor Laurence Tribe, who noted that the one thing to come out of the ordeal is the reassurance that the U.S. district court refuses to go along with the DOJ drama.

Trump "has left little doubt about his willingness to do so if he senses at any given moment that it would serve his theatrical or political interests — interests that he seems incapable of distinguishing," Tribe said.

Unfortunately for Barr, this puts him and the Justice Department's credibility and integrity into question.

"The Trump administration lied to the courts about the real reason for the citizenship question. And they got caught by the Supreme Court," former federal prosecutor Mimi Rocah told Rubin. "Now Trump has directed DOJ lawyers to come up with some other lie. No DOJ lawyer should sacrifice her integrity with the courts for this or any administration."

Rubin anticipated that this would add to the laundry list of hearings and investigations the Judiciary Committee intends to look into.

"Trump's contempt for the rule of law and blatant dishonesty would not continue without the help of underlings," Rubin wrote. "And they must do some serious soul-searching."

"There are some things no DOJ lawyer can do. One of those is make arguments in court that are untrue in order to benefit the political whims of a president," former prosecutor Joyce White Vance said. "If DOJ's leadership, the [attorney general,] the deputy AG, the solicitor general and the head of the Civil Division [don't want to be] complicit in violating the duty of candor DOJ lawyers owe to the court, then they should resign on principle and in protest."