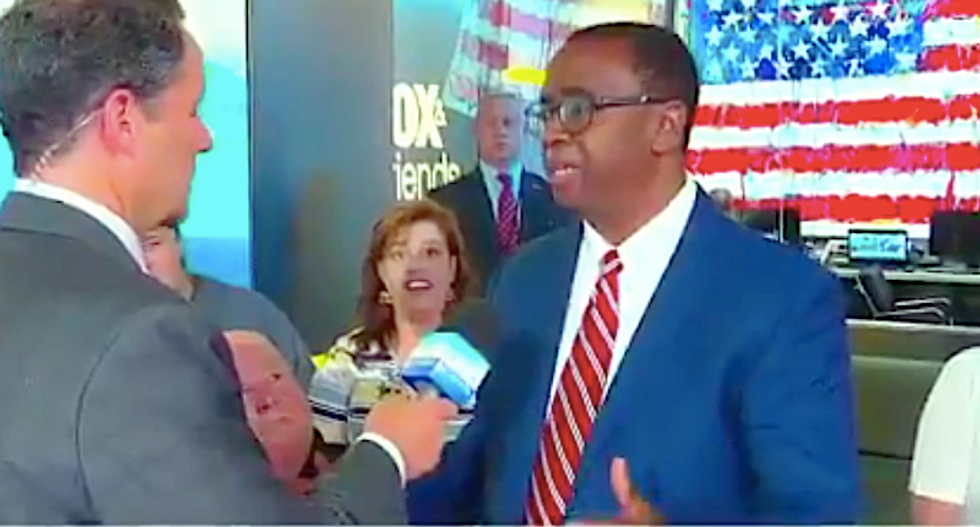 As another racism scandal engulfs the White House, Fox News hauled a black audience member in front of the camera to assure President Donald Trump that African-American voters "love" him.

A former White House official was quoted this week saying that Trump got a warped sense of his popularity with black voters from watching Fox News all day, and the network provided a crystal-clear example of that Thursday morning.

"It's crazy," said a member of the studio audience who identified himself as Jim, from Scarsdale, New York. "AOC, she is really new speaker of the House. This Omar is the chairman of the Democrat Party. This stuff about racism and attacking President Trump."

"African-Americans love the economy right now," Jim continued. "We have got 6 million new jobs, 1.5 million jobs for African-Americans. He has produced over $100 million for opportunity zones 8,000 regions that are depressed in the United States. He's doing the right thing."

"If he's watching today, President Trump, African-Americans love you," he added. "You will get more than 50 percent. Let Trump be Trump."

Co-host Brian Kilmeade asked whether he believed Trump was signaling a racist dog whistle by telling Reps. Alexandria Ocasio-Cortez and Ilhan Omar, among others, to go back to their home countries -- but Jim didn't agree.

"My father used to say every single day if you don't like it here, just leave," Jim said. "Same thing. Anybody that's talking bad about America -- Omar should be ashamed of herself the way she's out there laughing about al-Qaeda. We've got 3,000 Americans have lost their lives. She should leave and go to Venezuela."

Kilmeade was impressed by Jim's ability to rattle off Fox News talking points.

"Why don't you do the show?" Kilmeade said, as the audience cheered and hooted. "You're better at it than I am."

Fox & Friends audience member denies that it's racist to tell people of color to go back where they came from, then… https://t.co/nvqvzZYqWT
— Bobby Lewis (@Bobby Lewis) 1563447713.0