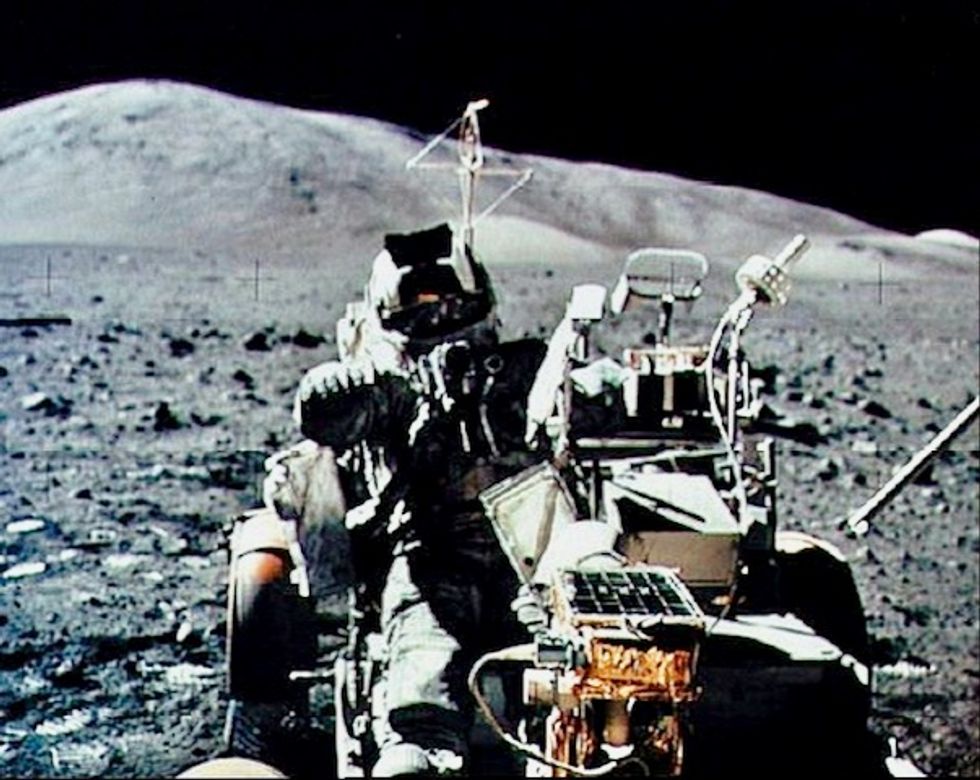 A NASA picture taken by US crew commander Eugene A. Cernan during the Apollo 17 mission on December 13, 1972 shows astronaut and geologist Harrison H. Schmitt seated in the Lunar Roving Vehicle on the surface of the moon NASA/AFP/File / Eugene A. Cernan

The Apollo program that put American astronauts on the moon was used as a tool to advance integration in the South, where the advancement of civil rights sparked violence and political realignment.

President John F. Kennedy wanted to use the space program to show the American system was superior to communism, but he also wanted to use NASA to advance black progress in the South, where many of the agency's facilities were located, reported AL.com.

Wernher von Braun and the German team designed moon rockets on a military base in Huntsville, Alabama, while those rockets were launched from Florida and the spaceflight program was headquartered in Houston, Texas.

The Marshall Space Flight Center reached out to historically black colleges and universities and invited representatives to Huntsville in 1963, and they helped set up the nation's first black co-op program.

Those first recruits -- Walter Applewhite, Frank C. Williams Jr., Wesley Carter, George Bourda, Tommy Dubone, William Winfield and Morgan Watson -- found that no one in Huntsville would rent them apartments or hotel rooms, and they encountered strict segregation at concerts and other public events.

President Lyndon B. Johnson, who took over after Kennedy's assassination, warned U.S. Sen. John Sparkman (D-AL) that the Marshall Space Flight Center would be moved if Huntsville continued to discriminate against black people.

Sparkman told local business leaders that Johnson was "madder than hell" that NASA couldn't get anyone but "lily-white males, mostly," to come to Huntsville, according to veteran Huntsville Times reporter and editor Bob Ward.

A black funeral home owner named R.E. Nelms was asked to order a meal at the local King’s Inn hotel restaurant as part of a plan intended to appease Johnson.

Nelms complained afterward that his steak was "inedible" when it was served to him, but local officials were able to tell Washington that Huntsville restaurants were serving black customers.

Despite all those efforts, black hiring never exceeded 3 percent of the Apollo program's workforce.

The NASA situation in Huntsville was actually better than elsewhere in the South, because von Braun was personally committed to change -- but black workers still faced discrimination by white colleagues and in the local community, which blamed the space agency for unwelcome pressure to desegregate.

But despite the space program's best efforts -- and the enormous distraction of the mission to send humans to the moon -- attitudes and structural challenges prevented NASA from making significant gains to end segregation.

Mark Meadows's new book walks through the fury that he and others in the White House faced after it was leaked to the press that then-President Donald Trump was rushed to the bunker when a protester jumped over the temporary fencing around the White House complex.

If there's one thing consistent with Trump, it's that he can never be seen to show weakness. His niece, Dr. Mary Trump, a psychologist, has walked through many of the reasons for this that go back to his father Fred Trump Sr.